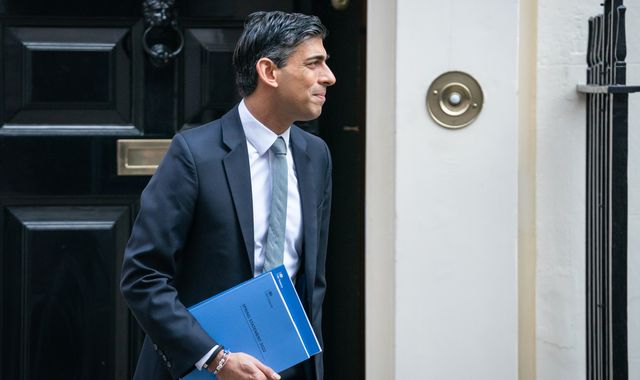 Rishi Sunak has been forced to defend his spring statement over claims that it failed to help the poorest in a testy appearance before MPs.

The chancellor was questioned about his decision not to match benefits, due to rise by just 3.1% in April, to the surge in inflation to an expected 8% this spring.

Mr Sunak, who appeared before the Treasury select committee to discuss the spring statement, stressed that his focus was on trying to keep borrowing under control – after public finances were battered by the pandemic – and ease the tax burden for working people.

He has been criticised for failing to help the worst-off, however, with the Resolution Foundation think tank suggesting the package of measures last week would push 1.3 million people, including 500,000 children, into poverty.

Read more:
Beth Rigby analysis: This was no big giveaway from the chancellor

‘Governments should not have to compensate everybody’

Mr Sunak said he disagreed with the idea that “government can or should” compensate everybody for the resulting real-terms hit to their finances, especially when global factors are at play.

He was pressed on why he had still chosen to announce tax-cutting measures rather than give more help to those who were out of work.

Mr Sunak told MPs that because of the way the social security system operates it would not have been possible to scale up benefits at such short notice.

He also said he had decided to keep borrowing down “at a time when we are worried about the macroeconomic outlook, particularly with regard to interest rates and inflation”.

He said borrowing was already forecast to be 60% higher than the post-war average.

“My job is to make the right long-term decisions and my view is that an excessive amount of borrowing now is not the responsible thing to do,” Mr Sunak said.

That would risk stoking inflation further, hitting the poorest even harder, he added.

Labour MP Angela Eagle said Mr Sunak had not done enough to stop the poorest from suffering “massively” from the “vicious” price spiral.

Mr Sunak said: “We made a choice to cut taxes on working people – 30 million people in work will benefit from the increase in personal tax thresholds, disproportionately those on lower and middle incomes.

“Someone else sitting here could have said ‘I’d rather spend that £6bn on the welfare system’, that’s absolutely a choice somebody else could have made.”

He said he believed other policies to help the poorest such as helping them from welfare to work and £9bn worth of loans to offset rising energy bills were the right approach.

“I think the mix of policies we’ve got is the right mix,” the chancellor added.

Brexit was always going to have an impact

Mr Sunak also came the closest he has come to admitting Brexit has cost the UK, telling MPs: “It was always inevitable if you change the exact nature of your trading relationship with the EU, that was always going to have an impact on trade flows.”

But he insisted the fact UK trade was down was “not as a result of Brexit” and the benefits of new trading relationships “take time”.