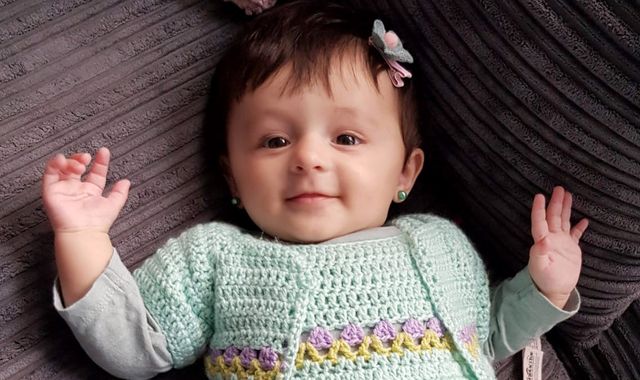 An unlicensed dog breeder has been found guilty of murdering a toddler.

Nusayba, who weighed just 17lbs, was taken to hospital but died four days later. Her cause of death was “violent shaking” and impact, according to prosecutors.

Haider had a history of violence, attacking a previous girlfriend and abusing her children.

On Monday, a jury at the Old Bailey found him guilty of murder and child cruelty.

Nusayba’s mother Mrs Amazir, from Newham, east London, met him through a dating website and effectively moved in to help with his dog breeding business, jurors heard.

On the day of Haider’s deadly attack, Mrs Amazir got up to tend to the dogs when she heard Nusayba crying, jurors heard.

As she went towards her room, she allegedly heard the defendant say “shut up, Nusayba” and a slapping sound.

She heard Nusayba “yelp” in response, jurors were told.

Afterwards, the girl did not seem herself, though there was no outward sign of injury, the court heard.

At around 5pm, Nusayba began having a fit and Haider suggested to Mrs Amazir that she take the youngster to her home to “relax”, jurors heard.

Mrs Amazir left and called an ambulance from the bus stop at the end of the road.

When paramedics arrived, it was clear Nusayba was “gravely ill” and she taken to hospital.

Her condition did not improve and, on 17 September 2019, intensive care support was withdrawn and she died.

Just over a fortnight before the fatal attack, Nusayba allegedly suffered a separate head injury while in the care of the defendant.

But Haider told Mrs Amazir that Nusayba had fallen over in the kitchen while he was in the garden feeding his dogs.

He went on to become increasingly threatening towards mother and child, it was alleged.

Haider ‘hit Nusayba on hand during time out’

He put Nusayba in a corner, hit her on the hand during “time out”, and made her adopt various “stress positions”, prosecutor Edward Brown QC told the court.

Haider lived with his mother in a four-bedroom house in Ilford, northeast London.

At first, Mrs Amazir had no real concerns about Haider’s behaviour – which could be “snappy” and “verbally aggressive”, the court heard.

Mr Brown said Haider appeared to justify his behaviour by accusing Mrs Amazir of being too soft.

Mr Brown told jurors: “Whether in the end it was a severe blow to the head or a severe shaking of her – or both – does not matter for the purposes of this trial of this defendant for her murder, and nor do the prosecution have to prove that it was one or the other.

“Either – or both – of course involved a very serious and fatal assault on a defenceless child.”

Haider had denied any physical contact, let alone an assault – but his claim was rejected by the jury.

Mrs Justice Cheema-Grubb adjourned sentencing until Wednesday, saying: “Mr Haider has declined to attend his hearing today. I would like to give him the chance to be here for his sentence.”