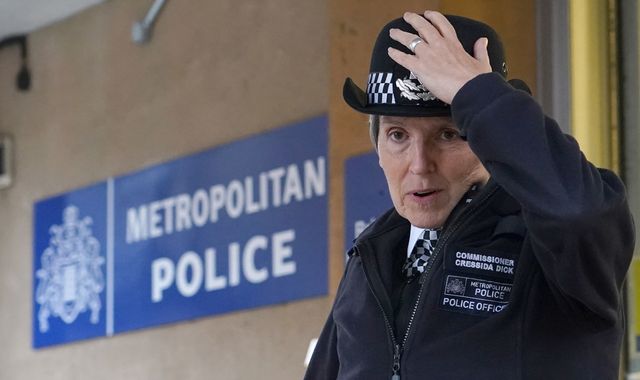 The temporary cover for Metropolitan Police commissioner Dame Cressida Dick has been announced before a permanent successor is appointed in the summer – amid confirmation she will leave her post next month.

Dame Cressida quit in a surprise move in February – but agreed to stay on until arrangements to find a replacement are finalised.

In a written statement to the Commons on Monday, Home Secretary Priti Patel also confirmed that the circumstances of Dame Cressida’s resignation will be reviewed by the outgoing chief inspector of constabulary, Sir Tom Winsor.

Deputy Commissioner Sir Stephen House will temporarily stand in as head of the force until the next commissioner is appointed.

Ms Patel said: “Dame Cressida Dick will conclude her tenure as commissioner of the Metropolitan Police Service in April.

“She deserves our profound gratitude for her decades of public service and leadership in policing, as well as our best wishes for the future.

“Dame Cressida has shown exceptional dedication to fighting crime in London and beyond throughout her time as commissioner, as the first woman to hold the role of commissioner.”

‘Vital we get the right person’ for top police job

“It is vital that we get the right person for the biggest leadership role in policing in this country.”

The home secretary anticipates the process will “conclude in the summer” and her recommendation will be made to the Queen and will “pay regard to the views of the mayor of London”.

“In the immediate term following Dame Cressida’s departure, legislation enables the deputy commissioner, Sir Steve House, to exercise temporarily the powers and duties of the commissioner,” she added.

“Sir Steve and the mayor of London must drive improvement even before the next commissioner is in place to ensure that the Metropolitan Police Service restores trust and takes every necessary action to keep the public safe.”

Dame Cressida quit after London mayor Sadiq Khan said he was not satisfied with her handling of outrage over racist, misogynist and homophobic messages shared by a group of officers based at Charing Cross police station.

Her resignation, which came hours after she said in a media interview she had no intention of quitting, was greeted with dismay by many officers.

Share
Facebook
Twitter
Pinterest
WhatsApp
Previous articleYasmin Begum: Man charged with murder and burglary after mother stabbed to death while children at school
Next articleCouncils count the cost as they face pressure to cut off Russian energy contracts