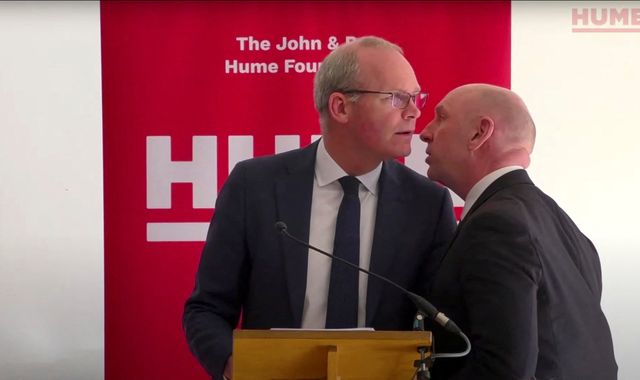 A 38-year old woman has been arrested as police investigate the security alert which led to Ireland’s foreign minister being evacuated at a peace event in Belfast.

Simon Coveney, was taken off stage mid-speech last Friday after a van was reportedly hijacked and driven to the venue.

A controlled explosion was carried out at the scene.

Police declared it a hoax and said pro-British loyalist militant groups were likely behind the hijacking and placing of the fake device.

A number of items including a suspected firearm, two vehicles, a quantity of controlled drugs and a large sum of cash were recovered from searches, the Police Service of Northern Ireland said.

The searches were conducted in the Ballysillan and Springmartin areas of north and west Belfast.

Assistant Chief Constable McEwan said over 25 homes were evacuated, local schools were affected, and vulnerable residents in a local nursing home had to be moved to another part of their home due to the event.

He added that the van driver had been taken to hospital.

“Just think about this, the victim believed at this point he was driving a van containing a live bomb and that his family were being threatened”, he said.

Mr Coveney tweeted that he was “saddened and frustrated that someone has been attacked and victimised in this way” and thanked police for their help.

In reaction to the events, DUP leader Sir Jeffrey Donaldson said people “want to get on with their lives and have no truck with those who cling to violence”.

Secretary of State for Northern Ireland, Brandon Lewis, said he was aware of the security alert and tweeted his “solidarity” with Mr Coveney.

The Irish foreign minister was speaking at The Houben Centre, on Crumlin Road, to address the Building Common Ground event.

The event was organised by the John and Pat Hume Foundation and Sky News understands Mr Coveney was five minutes into his address before he was escorted off the premises.

The rest of the attendees were evacuated from the back of the building.

Police are appealing for information about the event.