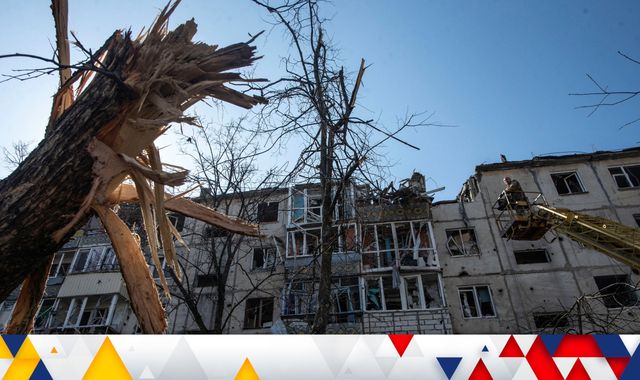 Vladimir Putin and his henchmen face a “day of reckoning” with evidence of war crimes having been committed in Ukraine, a cabinet minister has said.

It was also “absolutely right” that strict sanctions against Russia should remain in place until the Kremlin withdraws its forces following the “illegal invasion”, Nadhim Zahawi told Sky News.

And he insisted it was for the Russian people to decide the fate of “Putin and his cronies”, after the US President Joe Biden declared the Moscow leader “cannot remain in power”, causing the White House to issue a rapid clarification that he was not calling for regime change.

Key developments:
• This woman’s waging her own battle against Putin – and all she needs is her mobile phone
• Responding to punishing sanctions, Putin attempts to swing his own financial sword
• Powerful explosions on outskirts of city of Lviv in western Ukraine
• Kremlin’s top military officials appear for first time in weeks after ‘significant’ silence
• Survivor of theatre bombing tells of chaos in besieged Mariupol

Speaking to the Sophy Ridge On Sunday programme, Mr Zahawi said: “The important thing to remember is that there is evidence that war crimes have been committed in Ukraine, the targeting of civilian areas.

“The Deputy Prime Minister (and Justice Secretary) Dominic Raab has been working with the international criminal court to make sure that that evidence is well documented, well collected, so those who commit war crimes know that there will be a day of reckoning.”

He also backed Foreign Secretary Liz Truss’s stance that sanctions cannot be lifted against Russia until there is a full withdrawal of troops from Ukraine.

Mr Zahawi said: “Absolutely right, I think the Russian illegal invasion has to end and the Russian army has to leave Ukraine, and it’s up to the Ukrainian people, they must be very much the ones who decide what that peace looks like.”

He added: “Clearly, the Russian military has miscalculated.

“I think the initial sort of shock and awe of taking the whole of Ukraine has not worked for them.

“The Ukrainians have fought like lions, they have defended their country.”