Thousands of pupils miss out on two weeks of schooling a year due to shorter days, says Nadhim Zahawi 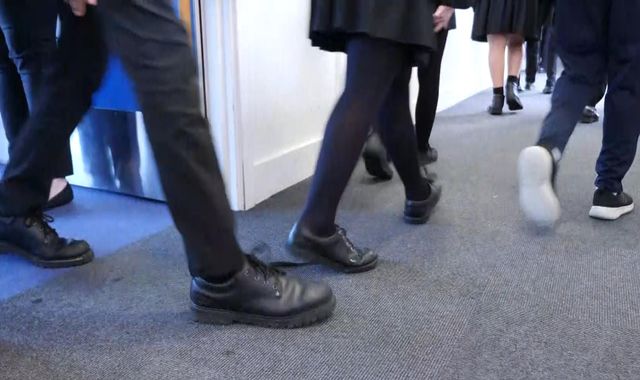 Thousands of pupils are losing out on around two weeks of learning a year because of shorter school weeks, Education Secretary Nadhim Zahawi has warned.

The cabinet minister highlighted the problem as he said he wanted every school to ensure their week is at least 32.5 hours long by September 2023.

It is among the measures contained in the Schools White Paper, due to be published on Monday.

The move forms part of the drive aimed at ensuring 90% of pupils leave primary school having reached expected standards in numeracy and literacy.

While most school weeks across primary and secondary schools in England already meet the weekly target, the Department for Education has said said there are “discrepancies”.

Speaking to the Sky News’ Sophy Ridge On Sunday programme, Mr Zahawi also defended the awarding of a knighthood to his predecessor, Sir Gavin Williamson, who was twice sacked as a cabinet minister and oversaw the exams fiasco in 2020.

Mr Zahawi pointed out the average school week was 32.5 hours long, but at “thousands of schools” pupils were getting between 10 and 30 minutes less teaching time a day.

He said: “If it is 20 minutes lower… that is the equivalent of two weeks lost from the school.

“Two weeks loss of learning is a big loss which is why I want every school to do this.

“I’d like them all to do it by the end of this year, but I know some of them have logistical problems which is why we said that by next year they should achieve that.”

When pressed over the widening gap between pupil funding in private and state education since the Tories took office, Mr Zahawi blamed the financial crash that “led to us having to tighten our belts and try and get the economy back on its feet”.

He pointed to the additional investment now going into education.

Sir Gavin held the post during most of the COVID-19 pandemic when he came under heavy criticism for cancelling A-levels and GCSEs two years in a row and for closing schools.

Acknowledging what he was saying “isn’t universally popular”, Mr Zahawi said: “When I was in the department under Theresa May, skills was considered the Cinderella part of the department.

“Gavin Williamson’s work on skills, T-Levels, the lifelong learning entitlement will transform the fortunes of young people in our country who may not want to go to university.

“For that alone, I think he deserves that knighthood.”

‘The government has no answers’

She said that after two years of “pandemic chaos”, the plan would leave parents, teachers and pupils “wondering where the ambition for children’s futures is”.

“Hundreds of thousands of primary children live in an area with no ‘good’ schools, the gap in learning between the most and least well-off pupils has widened during COVID, four in 10 young people leave education without the skills they need and young people are experiencing a mental health crisis. Yet the government has no answers,” Ms Phillipson said.

Geoff Barton, general secretary of the Association of School and College Leaders, said: “We are unconvinced by the benefits of introducing a minimum expectation on the length of the school week of 32.5 hours.”

He said that the vast majority of schools already met this expectation or came “very close” to meeting it, and that it was important to understand the reasons that some schools had shorter weeks, such as transport arrangements for rural schools.

Paul Whiteman, general secretary of school leaders’ union NAHT, said: “Simply adding five or 10 minutes to a day is unlikely to bring much, if any, benefit.”