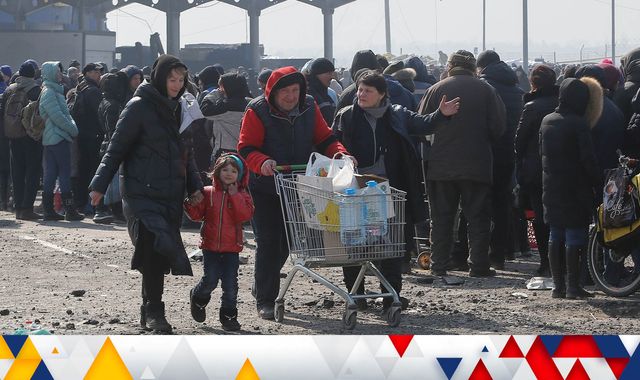 The UK government is to send £2m worth of vital supplies to Ukrainian cities surrounded by Russian troops as the conflict continues.

Foreign Secretary Liz Truss has confirmed the UK will send a donation of dried food, tinned goods and water to Ukraine following a request from the country’s government.

Warehouses in Poland and Slovakia are being readied to supply the goods from early next week, the Foreign, Commonwealth and Development Office (FCDO) said.

From there, around 25 truckloads will then be transported by road and rail to the Ukrainian communities in the greatest need.

Ms Truss said teams are “working day and night” to help get humanitarian assistance to those requiring it.

“This vital donation of food and supplies will help support the Ukrainian people in the face of Russia’s barbaric invasion.

“Our teams are working day and night with our Polish and Slovakian friends and the government of Ukraine to ensure those most at risk get the essential supplies they so badly need.”

It is thought that more than 12 million people are currently in need of humanitarian assistance across Ukraine.

The donations need to be sent now as the window to reach towns and cities already encircled is closing.

Many people are trapped without access to food, water and cooking facilities – taking refuge in basements from shelling.

Alice Hooper, FCDO humanitarian adviser said the need for vital supplies is clear “with so many people in encircled areas trapped in basements without access to food or water”.

“Nearly six million children remain in Ukraine, many sheltering inside buildings which are coming under attack,” she said.

“We are working with partners at the borders to ensure these vital UK supplies reach the places they are needed most as quickly as possible.”

The donation comes as part of the £400m of support pledged by the UK government, with £220m of this spent on humanitarian aid.

Subscribe to the Ukraine War Diaries on Apple Podcasts, Spotify and Spreaker

Read more: Sunak challenged over wife’s links to company with presence in Russia

The foreign secretary has announced the allocation of the first tranche of this funding, to be shared among trusted humanitarian delivery partners on the ground including the UN refugee agency UNHCR, UN Office for the Coordination of Humanitarian Affairs (OCHA), the OCHA-managed Ukrainian Humanitarian Fund, and International Freedom of Red Cross and Red Cross Societies.

Russia warns offence will continue until Putin’s ‘targets’ are met

The UK government’s latest pledge comes as the Russian defence ministry said the country’s invasion of Ukraine will continue until it “reaches the targets set by Vladimir Putin“.

In an update on peace talks, a Russian negotiator said the two sides were getting close on secondary issues, but not really making progress on key ones, the Interfax news agency reported.

On the ground, the Ukrainian city of Chernihiv has been cut off by Russian forces, its regional governor has said.

“The city has been conditionally, operationally surrounded by the enemy,” governor Viacheslav Chaus said on national television.

In its latest intelligence update, however, the UK Ministry of Defence said Ukrainian forces were re-occupying towns and defensive positions “up to 35km east of Kyiv”.

In Mariupol, about 300 people died in the bombing of a theatre in the port city last week, its city council has said.

The number is said to have come from those inside the building at the time, outside which was a large sign saying “children” in Russian.

It became the “last refuge for hundreds of innocent people”, a council spokesman said. More than 1,300 people were sheltering inside, according to the Ukrainian parliament’s human rights commissioner.

Meanwhile, Transport Secretary Grant Shapps is preparing to welcome a family of Ukrainian refugees into his home – along with their pet dog.

The cabinet minister said he wanted to “make a meaningful difference” by taking in the household, forced to flee the country’s war-torn capital Kyiv, following the invasion by Russia.

The family includes a mother, her six-year-old son and his grandmother.

Mr Shapps was among more than 150,000 people across the UK to sign up to a government scheme offering shelter to people escaping the Ukraine conflict, which has triggered a humanitarian crisis.