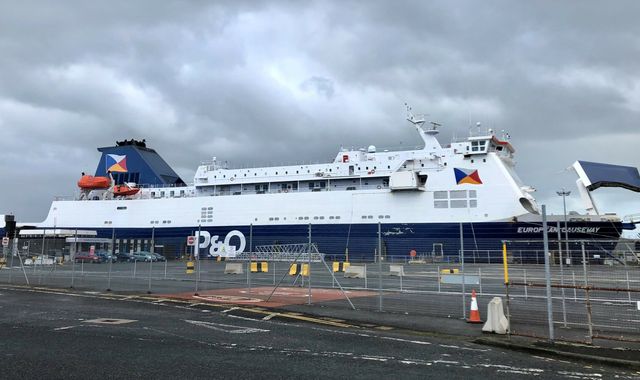 A P&O ferry has been detained in Northern Ireland on safety grounds – just days after 800 workers were sacked without notice and replaced with cheaper workers.

The Maritime and Coastguard Agency (MCA) said the ship, The European Causeway, was held in Larne “due to failures on crew familiarisation, vessel documentation and crew training”.

Its statement said: “The vessel will remain under detention until all these issues are resolved by P&O Ferries. Only then will it be reinspected.”

The MCA added: “Detention of ships is based on concerns over their safety and to prevent them going to sea.”

There were no passengers on board when the coastguard announced the move.

Transport Secretary Grant Shapps tweeted: “Following my instruction to inspect all P&O vessels prior to entering back into service, the Maritime and Coastguard Agency has detained a ship for being unfit to sail.

“I will not compromise the safety of these vessels and P&O will not be able to rush inexperienced crew through training.”

Labour’s shadow transport secretary, Louis Haigh, responded to the detainment by calling for the hundreds of sacked workers to get their jobs back.

General secretary Mick Lynch said: “The seizing of the European Causeway by the MCA tonight shows that the gangster capitalist outfit P&O are not fit and proper to run a safe service after the jobs massacre.

“This mob should be barred, their ships impounded and the sacked crews reinstated to get these crucial ferry routes back running safely.”

P&O’s boss has said the new crews are paid below UK minimum wage, apart from those on domestic routes.

Mr Hebblethwaite, in evidence to MPs on Thursday, admitted the company broke employment law by failing to consult unions and staff.

However, he denied breaking criminal law in an email to remaining staff on Friday, telling them they should not fear the same fate as their former colleagues.

Protests about the sackings are expected in Liverpool, Hull and Dover on Saturday.