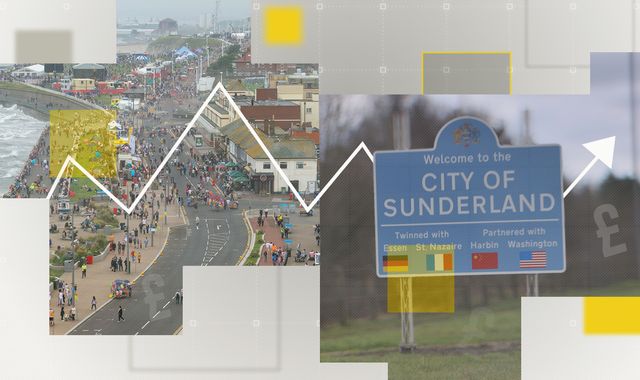 New analysis shared exclusively with Sky News concludes that the government’s efforts to level up the most deprived parts of the UK will fail without a shift in focus.

Today, the government will release its detailed plan for levelling up the “left behind” parts of the UK.

Prime Minister Boris Johnson said: “It is a vision for the future that will see public spending on R&D increased in every part of the country; transport connectivity improving; faster broadband in every community; life expectancies rising; violent crime falling; schools improving; and private sector investment being unleashed.”

But the New Economics Foundation (NEF) says the current plans, which prioritise place-based funding, fall short – as they don’t put enough emphasis on investing in people.

“If you look at much of the country that’s held back, that remedy just doesn’t work,” she says. “You need to start with the people, you need to start trying to drive up living standards.”

She says that to achieve this, more decision-making needs to happen at the local level.

Today’s plans detail how the government will decentralise power by increasing the number of city-region mayors and offering every part of England a “London-style” devolution deal.

But the NEF has questioned how effective this will be if mayors aren’t given more funding to invest, powers to raise local tax and “real control” over decisions that shape the lives and livelihoods of the community.

So, what’s the evidence that just investing in an area doesn’t work?

More than £4bn has already been allocated to level up deprived parts of the UK through job and business creation.

However, while investing in infrastructure drives productivity, it will not necessarily increase household incomes.

Take Sunderland, for example. Since the 1980s, this North East city has grown into the UK’s leading hub for car production, with 20,000 manufacturing jobs.

But despite high productivity, Sunderland has considerable deprivation. Average disposable household income in 2019 was just over £16,000 per person, 22% below the English average.

There are a number of reasons why economic activity and local living standards can become disconnected.

Firstly, money made by businesses does not always flow into the local community, as it is used to pay shareholders and workers that do not live in the surrounding area.

Moreover, even if money is spent locally, it does not mean that all households will benefit. There is considerable income inequality within as well as between places, as can be seen in the map below.

More than two in five neighbourhoods in Sunderland are in the top 20% most income-deprived in England (the dark red areas), but many of them border some of the most affluent parts of the country (the dark blue areas).

As the UK faces a cost of living crisis, it is also important to realise that levelling-up need is not just dependent on local jobs and businesses.

Rising energy and housing costs are squeezing household budgets across the UK. In places like Sunderland, where real wages are stagnating, many people are struggling to pay bills and put food on the table.

But what about the places that also require infrastructure investment?

Andy Westwood, professor at the University of Manchester and special adviser to the House of Lords Economic Affairs Committee, says the government is right to focus on productivity, but it isn’t enough on its own.

“[We’ve got] a long-term problem with productivity with local and regional economies that’s built on decades of failure… [but] even if we’ve got the recipe right, that’s a 10 to 20 year return,” he said.

The NEF finds that twice as many places in need of levelling up – two-fifths of areas in England – need to improve productivity as well as income.

Compared to other G7 nations, the UK has a poor track record for productivity improvements. Only Italy has seen a smaller increase in output per hour worked since 2010.

“Broadly, the basket of things is right… but my feeling is that it is largely controlled from the centre and not joined up,” he says. “The government needs to devolve more things, but also to align them so that those institutions can be more than the sum of their parts, rather than less.”

Share
Facebook
Twitter
Pinterest
WhatsApp
Previous articleWhoopi Goldberg suspended from co-host role on talkshow The View over Holocaust comments
Next articleLevelling Up: Government to publish 12 ‘missions’ in blueprint for ‘spreading opportunity’ across the UK