GCSE system needs an overhaul and ‘arbitrary’ exams at age 16 should be scrapped, review says 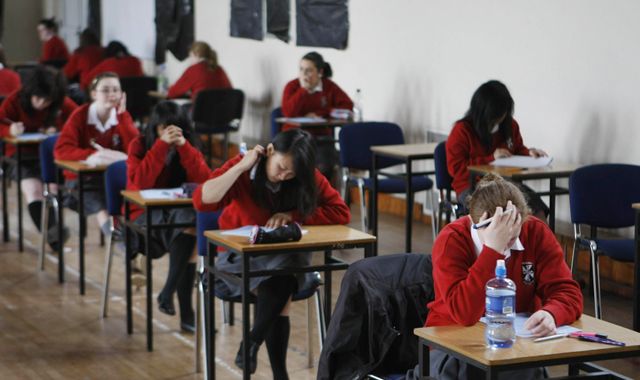 The GCSE system should be overhauled and pupils should have the chance to demonstrate their skills up to the age of 19 rather than at a fixed point in time at the age of 16, a new review has said.

The Independent Assessment Commission (IAC) is calling for “fundamental changes” to England’s exam system, including “arbitrary” assessments at age 16 to be scrapped.

The body, which brings together academics, teachers and students, undertook its review of the GCSE system during the COVID pandemic when full public exams were cancelled for two years in a row in 2020 and 2021, prompting major changes to the grading system.

The review claims that testing of pupils “should not be based around a fixed age of 16” for GCSEs, adding they should have opportunities to “demonstrate achievements when ready”, throughout their schooling from age 14 to 19.

It reported that the “sudden, dramatic and contentious changes” to exams in response to the pandemic revealed how the system in England “was not sufficiently robust to cope with a crisis such as that related to COVID”.

‘Failing its own test’

Professor Louise Hayward, chair of the IAC, said the current exams system is “failing its own test” to provide an assessment system that serves pupils, society and the economy “sufficiently”.

“The IAC report identifies inequalities deeply ingrained in a system and which has to change if there is to be greater educational equality,” she added.

“We need a system that helps every young person to progress to college, employment or university with qualifications that recognise their achievements and the capabilities they need to succeed in the challenging times that lie ahead.”

Prof Hayward said there are currently too many young people that are denied opportunities because their time at school has not been fully recognised, which is ultimately not good for the economy or society.

Geoff Barton, general secretary of the Association of School and College Leaders, also supported the notion of an exams overhaul.

He said: “Many people in education feel that our current system of GCSEs is an anachronism which harks back to an era when large numbers of young people left school at 16 rather than generally going on to further education and training as they do now.”

Mr Barton added that the government had “doubled down on this anachronism” through “making the current iteration of GCSEs rather like old-fashioned O-levels”.

Former Education Secretary Michael Gove introduced the reformed GCSEs, which from 2015 onwards were intended to be more academically rigorous.

Mr Barton said GCSEs in their current form were “very academic, with lots of memorisation, and assessed almost solely on a large set of terminal exams”.

He added: “There is also a strong argument for making more use of digital technology in assessment, which could not only move us away from the pen and paper era but allow for more adaptive assessment built around the individual student.”

Last year, it was revealed that pupils taking GCSEs and A-levels in England will be given a choice of topics and be told the “focus” of exams in advance to “maximise fairness”.

The Department for Education (DfE) said the intention is to “help students reach their potential” after learning was disrupted during COVID.