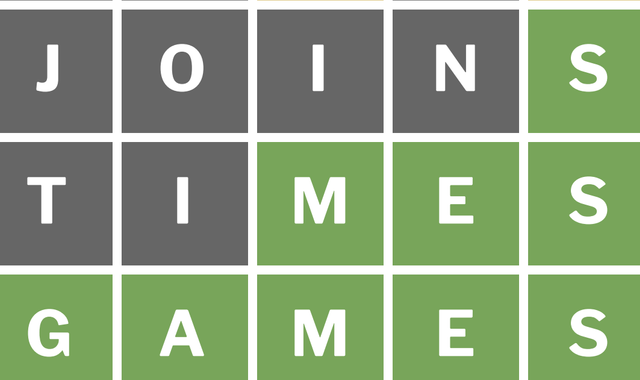 Wordle, an online word game which has seen a surge in popularity recently, has been bought by The New York Times.

The deal, which saw the US media company take over the running of the game from creator Josh Wardle, was for "an undisclosed price in the low seven figures".

Wordle sees players try to guess a five letter word each day within six tries, with players able to share their scores with others on social media.

It was invented by Mr Wardle, a software engineer from New York, and released in October 2021.

Some 90 people played it on the first day it was released, and now millions check in daily to guess the mystery word.

In a tweet sharing the news, Mr Wardle said: "The game has gotten bigger than I ever imagined (which I suppose isn’t that much of a feat given I made the game for an audience of 1)."

He added: "I’d be lying if I said this hasn’t been a little overwhelming.

"After all, I am just one person, and it is important to me that, as Wordle grows, it continues to provide a great experience to everyone.

"Given this, I am incredibly pleased to announce that I’ve reached an agreement with The New York Times for them to take over running Wordle going forward."

Jonathan Knight, general manager for The New York Times Games, said: "The game has done what so few games have done: It has captured our collective imagination, and brought us all a little closer together.

"We could not be more thrilled to become the new home and proud stewards of this magical game, and are honoured to help bring Josh Wardle’s cherished creation to more solvers in the months ahead.

"As part of our portfolio of games, Wordle will have an exciting future with the help of a team of talented engineers, designers, editors and more, furthering the user experience."

Mr Wardle added: "If you’ve followed along with the story of Wordle, you’ll know that The New York Times Games play a big part in its origins, and so this step feels very natural to me.

"I’ve long admired The Times’s approach to the quality of their games and the respect with which they treat their players.

"Their values are aligned with mine on these matters and I’m thrilled that they will be stewards of the game moving forward."