Sir David Attenborough nominated for Nobel Peace Prize along with Pope Francis, the WHO and Alexei Navalny 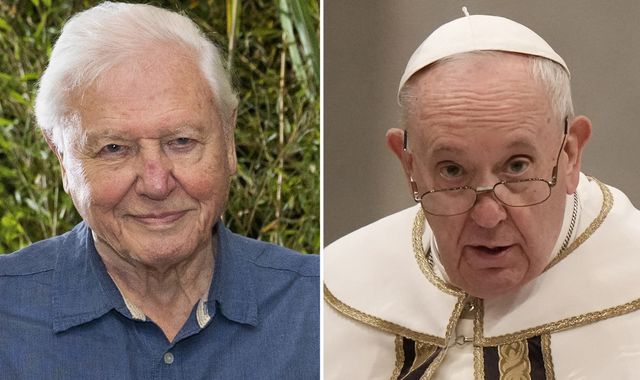 Sir David Attenborough has been nominated for the Nobel Peace Prize, joining Pope Francis and the World Health Organisation on the list of this year’s candidates.

Prominent dissidents, Sviatlana Tsikhanouskaya of Belarus and jailed Russian opposition politician, Alexei Navalny, are also included in the list, as is the Myanmar National Unity Government, formed by opponents of last year’s coup.

Tuvalu’s foreign minister Simon Kofe, who highlighted the threat of climate change to his low-lying Pacific Island nation by recording a speech for the United Nations climate conference standing knee-deep in seawater, has also been nominated.

Thousands of people, from members of parliaments worldwide to former winners, can propose candidates.

Attenborough, 95, whose TV nature programmes have won him worldwide acclaim, and Ms Tsikhanouskaya, who is in exile in Vilnius, are being backed by Norwegian lawmakers who have a track record of picking the winner.

Attenborough, best known for his landmark TV series illustrating the natural world, including Life on Earth and The Blue Planet, was nominated jointly with the Intergovernmental Science-Policy Platform on Biodiversity and Ecosystem Services (IPBES), which assesses the state of biodiversity worldwide for policymakers.

They were chosen for "their efforts to inform about, and protect, Earth’s natural diversity, a prerequisite for sustainable and peaceful societies," said Norwegian Green Party leader, Une Bastholm.

Norwegian parliamentarian Haarek Elvenes recognised her "brave, tireless and peaceful work" for democracy and freedom in her home country.

Pope Francis was nominated for his efforts to help solve the climate crisis as well as his work towards peace and reconciliation.

Mr Kofe was nominated by the leader of Norway’s Liberal Party, Guri Melby, for his work in highlighting climate change issues.

The World Health Organisation, which has been at the forefront of the global response to the coronavirus pandemic, is nominated for the second year running.

Henrik Urdal, director of the Peace Research Institute Oslo, said the organisation is "likely to be discussed in the Committee for this year’s prize".

Nominations do not imply an endorsement from the Nobel committee. The new laureate will be announced in October.