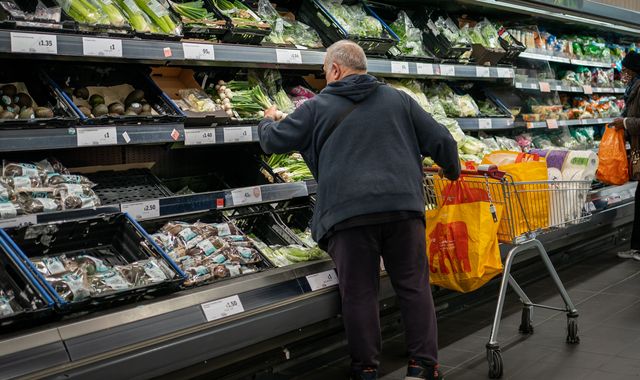 Shoppers are facing a further rise in grocery bills equivalent to £180 a year on average as the squeeze on households intensifies, new industry figures show.

Grocery prices in the four weeks to 23 January rose by 3.8%, according to data company Kantar.

It adds to the cost of living surge facing households with consumer price inflation in December recorded at the highest level since 1992 and expected to climb further this spring as energy bills go up.

High fuel prices and the prospect of more interest rate rises are adding to the headache.

Fraser McKevitt, head of retail and consumer insight at Kantar, said: “Prices are rising on many fronts, and the weekly shop is no exception.”

The latest grocery inflation rate recorded by Kantar was up from 3.5% in December.

It has not been higher since May 2020, when it was skewed by retailers scaling back promotions as they sought to discourage stockpiling in the early months of the pandemic.

“Taken over the course of a 12-month period, this 3.8% rise in prices could add an extra £180 to the average household’s annual grocery bill,” Mr McKevitt said.

“We’re now likely to see shoppers striving to keep costs down by searching for cheaper products and promotions. Supermarkets that can offer the best value stand to win the biggest slice of spend.”

Kantar said prices were rising fastest in products such as savoury snacks, fresh beef and crisps while falling in fresh bacon, vitamins and beer.

The industry data also showed a 3.8% fall in overall supermarket sales in the 12 weeks to 23 January compared with the same period a year ago, though they were 8% higher than pre-pandemic levels.

Kantar said it reflected the start of a return to shopping patterns that were normal before the pandemic as consumers go back to eating out and need to put less in their trolley on each trip.

The shift in habit was most noticeable in London, with take-home sales of food and drink down 11%.

Listen and subscribe to The Ian King Business Podcast here

Meanwhile online purchases were down 15% year-on-year, though at 12.5% of all grocery spending still represented twice the share of the market than before COVID-19 struck.

A resumption of socialising and working in the office seems to have encouraged consumers to scrub up, with razor blade sales up 14% and 20% more demand for deodorant.

Dry January provided a boost to alcohol-free beer, with sales up by 5%.

The only supermarkets to record year-on-year growth over the period were discount stores Aldi and Lidl and online-only retailer Ocado though Tesco and Waitrose also increased their market share.