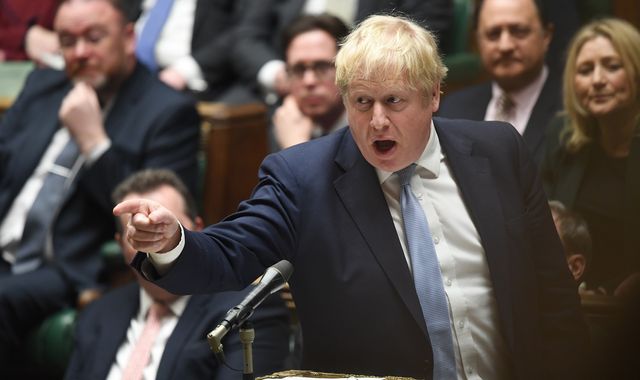 Boris Johnson is heading to Ukraine where over the border more than 100,000 Russian troops are gathering – as he fights for his premiership after the publication of the Sue Gray report.

The prime minister will hold talks with President Volodymyr Zelenskyy in Kyiv in a show of support for Ukraine as tensions on the country’s border rise amid fears of an invasion by Mr Putin’s forces.

Mr Johnson’s visit will coincide with the UK announcing £88m of new funding for Ukraine to support stability there and help reduce its reliance on Russian energy supplies.

Mr Johnson said: “It is the right of every Ukrainian to determine how they are governed. As a friend and a democratic partner, the UK will continue to uphold Ukraine’s sovereignty in the face of those who seek to destroy it.

“We urge Russia to step back and engage in dialogue to find a diplomatic resolution and avoid further bloodshed.”

The PM said on Monday evening he still hopes to speak to Russian President Vladimir Putin to try to defuse the Ukraine crisis after a planned phone call between them was cancelled.

It comes after a tense meeting of the UN Security Council on Monday, a meeting which had been requested by the US to discuss Moscow’s troop build-up.

Russia’s UN ambassador Vassily Nebenzia said US talk of war was “provocative”, adding that there was “no proof” Moscow was planning military action in Ukraine.

But US ambassador to the UN Linda Thomas-Greenfield said: “The provocation is from Russia, not from us or other members of this council.”

Foreign Secretary Liz Truss was meant to be accompanying Mr Johnson to Ukraine but on Monday night she said she tested positive for COVID-19 so will be staying behind.

She had earlier appeared without a face mask on the front bench in the House of Commons before announcing a strengthening of sanctions legislation that will give the UK the power to target any company or person linked to the Russian state.

Explainer: What’s in the Sue Gray report and which Downing Street parties did she investigate?

Ms Truss then attended a packed meeting of Tory MPs where Mr Johnson was making his case to keep his job following the release of the Sue Gray report into lockdown parties at Downing Street and Whitehall.

The report was pared back due to the recently announced Metropolitan Police investigation into 12 out of 16 events in 2020 and 2021 while COVID restrictions were in place – including the PM’s birthday celebration and a gathering in his Downing Street flat.

Mr Johnson promised to make major changes to the way No 10 and the civil service is run after apologising and insisting: “I get it and I will fix it”.

Despite Ms Gray’s limited update on her investigation, she was still scathing about the culture and leadership that led to the events while the country was abiding by strict restrictions.

Opposition MPs used Mr Johnson’s statement in the Commons to again call for his resignation, with Sir Keir Starmer accusing the PM of “hiding behind a police investigation” and the SNP’s Westminster leader Ian Blackford being escorted out of the Commons for refusing to withdraw accusations Mr Johnson lied to parliament.

Despite Mr Johnson trying to woo Conservative MPs to support his leadership, more Tory MPs spoke out against the PM.

Former cabinet minister Andrew Mitchell told the Commons that the PM no longer has his backing.

Tory MP Tobias Ellwood said if Mr Johnson fails to publish the Sue Gray report in full “he will no longer have my support”.

And former PM Theresa May said her successor “had not read the rules or didn’t understand what they meant and others around him, or they didn’t think the rules applied to Number 10”.

Conservative MP Aaron Bell said he was unable to hug his family after travelling hundreds of miles to go to his grandmother’s funeral in 2020 and asked: “Does the prime minister think I’m a fool?”

Andrew Bridgen told Sky News the “buck stops with the PM” and he thinks “this is death by 100 cuts, damaging again, his support is ebbing away slowly”.

But others spoke out in his support, with Gary Sambrook, who is a 2019 intake MP – of which many have called for the PM to go – saying “we love” Mr Johnson.

Culture Secretary Nadine Dorries staunchly defended the PM as she denied he was the subject of a criminal investigation, despite Ms Gray confirming police are looking into events Mr Johnson reportedly attended.