Sue Gray report: PM hoped to buy himself some time with Commons grilling – but events are in danger of spiralling out of control 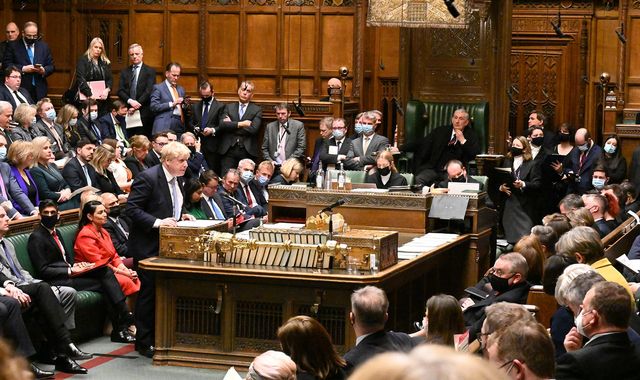 Take back control: that was obviously Boris Johnson’s aim in this marathon two-hour Commons statement on the Sue Gray report.

But while he certainly mentioned Brexit at every opportunity and appeared to claim the whole “partygate row” was a Remainer plot, his strategy flopped.

Mr Johnson couldn’t control his tormentors on the Opposition benches or the would-be assassins on his own side, led by Theresa May, who must have enjoyed her moment of revenge.

Those Tory MPs who did support him from the backbenches appeared to be reading out whips’ office handouts. Some of those MPs were very obviously reading.

Amid all the bluster and attacks on Labour leader Sir Keir Starmer – who, as director of public prosecutions, prosecuted journalists but not Jimmy Savile, the PM claimed – was a big broken promise and a major evasion.

The broken promise came in response to former Tory chief whip Mark Harper, when the PM failed to honour his pledge to publish the Sue Gray report in full when it’s handed over.

The evasion came when asked repeatedly whether he attended a party, highlighted in the Gray report, on 13 November 2020, allegedly to celebrate the sacking of Dominic Cummings.

Surrounded by some glum faces and silence on the Tory benches, the PM began by declaring: “I get it and I will fix it”, and promising to create and office of the prime minister, an updated civil service code and a new permanent secretary appointed.

Really? Is that it? Mr Johnson then started talking about Brexit and COVID and was lucky the Speaker, Sir Lindsay Hoyle, didn’t interrupt him for straying out of order.

But immediately after his Jimmy Savile attack on the Labour leader came two moments of high drama. First, Theresa May said the PM didn’t read the COVID rules, didn’t understand them or thought they didn’t apply to him. Wow!

A flustered Mr Johnson had no answer to that.

Next Ian Blackford, the SNP’s Westminster leader, seemed determined to get himself thrown out of the chamber by repeatedly accusing the PM of lying.

It’s a stunt he’s pulled before, in 2018 when John Bercow was speaker and he accused Mrs May of lying. This time, eventually, Sir Lindsay Hoyle obliged and Mr Blackford was marched out of the chamber by a sword-wielding sergeant-at-arms.

Then came another assassination attempt from the Tory backbenches. Standing alongside his close friend and ally David Davis, who two weeks ago told Mr Johnson “In the name of God, go,” Tory grandee Andrew Mitchell said he could no longer support the PM. Vicious.

By this stage, there was a lot of shouting at his opponents from the PM and he sounded rattled. Then his friend Sir Bernard Jenkin rose. Relief, surely. The PM must have been hoping for some respite.

No such luck. Sir Bernard, a Brexit crony the PM appointed to the plum post of Liaison Committee chairman, said Mr Johnson would be judged on how he governs over the next few months. Ouch!

As his grilling went on the prime minister was getting more and more shifty. Quizzed by Mr Harper on publishing the full Gray report when it’s delivered he said he would decide at the time. That broken promise has the potential to land the PM in big trouble.

Sir Robert Buckland, sacked from the Cabinet last year, ominously told the PM he will be judged on his conduct over the next few months. It sounded like the wily Sir Robert may be poised to write a no-confidence letter to Sir Graham Brady, the chairman of the 1922 Committee.

And the saintly Julian Lewis, who lost the Tory whip when he defeated the PM’s candidate, Chris Grayling, for the post of chairman of the high-powered Intelligence and Security Committee, demanded publication of the full report now.

In all, after the PM answered questions for just under two hours, the whole session could have been worse, but not much.

It was two hours dominated by questions about previous denials given to MPs by the prime minister over the past few months. He kept repeating the riposte: “Wait for the police report and Sue Gray’s full report.”

If some of his statements in the Commons do turn out to have been misleading or – as Opposition MPs claim – lies, he will be in serious trouble and probably forced to resign.

With this statement, the PM will have hoped to buy himself some more time.

But far from taking back control of events they are in danger of spiralling out of control.