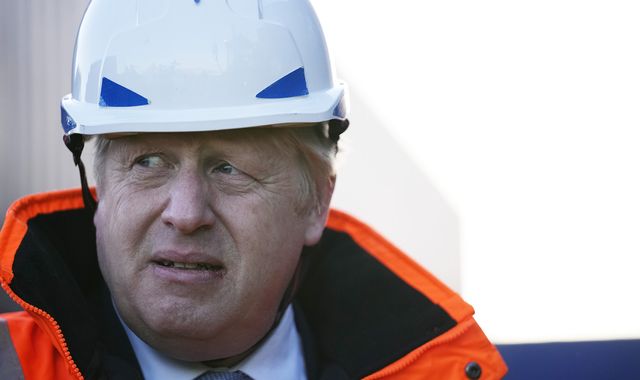 Some of the behaviour at events held in Downing Street and Whitehall during COVID restrictions is “difficult to justify”, according to a pared back version of the long-awaited Sue Gray report, which says some of the gatherings should not have happened.

A limited version of the Cabinet Office inquiry has been made public, a document which is likely to prove pivotal in determining Boris Johnson‘s future as he faces anger over the partygate scandal.

Now that the “update” of the report has been published, the PM will face MPs in the Commons from 3.30pm.

Key points in the version of the Gray report include:

• Some of the behaviour surrounding these gatherings is difficult to justify

• The garden at 10 Downing Street was also used for gatherings without clear authorisation or oversight. This was not appropriate.

Last week, the Metropolitan Police launched a criminal investigation into potential breaches of COVID regulations in Downing Street and Whitehall and requested Ms Gray’s report make only “minimal reference” to events it is looking at.

Sixteen events in 2020 and 2021 were investigated as part of her inquiry.

Her update reveals there are only four events the Metropolitan Police will not be investigating as part of its separate inquiry.

Events on eight separate dates are being looked into by the force, including an event that happened at the Downing Street flat and an event to mark the PM’s birthday in June 2020.

Ms Gray said the police investigation means it is “not possible at present to provide a meaningful report” setting out all she has discovered.

“As a result of the Metropolitan Police’s investigations, and so as not to prejudice the police investigative process, they have told me that it would only be appropriate to make minimal reference to the gatherings on the dates they are investigating,” her update states.

“Unfortunately, this necessarily means that I am extremely limited in what I can say about those events and it is not possible at present to provide a meaningful report setting out and analysing the extensive factual information I have been able to gather.”

Ms Gray said she has opted not to publish factual accounts of events not under investigation by police because to do so would damage her overall findings.

What has the reaction been?

The PM has come under pressure to resign over the partygate revelations concerning gatherings in Downing Street and across Whitehall during COVID restrictions in 2020 and 2021.

Some his backbenchers have already called for Mr Johnson to go, while a number of others have said they were waiting for the release of the Gray report before deciding whether to send a letter to the 1922 Committee of Tory MPs demanding a contest.

She told Sky News that Mr Johnson has “lost of the confidence of the British public” and should resign.

Lib Dem leader Sir Ed Davey called on Conservative MPs to do their “patriotic duty” and get rid of Mr Johnson.

“He must go before he does our country any more harm,” he said.

“The prime minister is guilty of breaking lockdown rules and misleading parliament. He must resign – or be removed from office,” he said.

Share
Facebook
Twitter
Pinterest
WhatsApp
Previous articleJoe Rogan and Spotify: Who is the US podcaster and what is the COVID misinformation row all about?
Next articleSue Gray report: Key findings from investigation into Downing Street lockdown parties