More than 45,000 homes still without power after storms Malik and Corrie bring winds of over 90mph 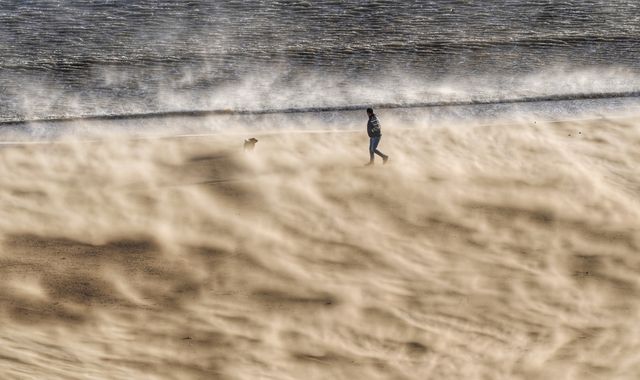 More than 45,000 homes are still without power as two weekend storms continue to bring disruption to energy supplies, rail services and schools.

Northern Powergrid, which supplies northern England, said around 80,000 customers experienced power cuts due to Storm Malik and that “4,000 customers are still without power”.

The energy company added it is “still assessing the impact of Storm Corrie, but we currently know of around 3,000 customers that are without power, over and above the customers affected by Storm Malik”.

Check the latest weather forecast in your area

On Monday, the energy industry said 45,500 customers remained without power following the weekend storms, with about 40,000 of them in northern Scotland.

It was understood most of those lost power during Storm Malik.

Energy industry spokesman Peter Kocen said: “Network operators restored power to 177,000 customers who have been affected by the storms over the weekend and last night.

“We are continuing to work as quickly and safely as possible to reconnect everyone, with 45,500 people without power just now.

“We are working closely with local authorities to co-ordinate a community response and provide support, including hot meals and respite, to those affected.”

Worst-affected were Northumberland, Tyne and Wear, and County Durham.

The Scottish government said most of the 98,000 households that lost power due to Storm Malik were expected to be reconnected overnight on Sunday.

However, it added that for some homes – mainly in Aberdeenshire – the disruption could last until Tuesday.

As well as parts of rural Aberdeenshire, there are pockets of customers without power in Angus, the Highlands, the Moray Coast and Perthshire.

Storm Malik blew down trees, damaged power lines and ripped roofs off homes in northern England and in Scotland on Saturday.

It was then followed by Storm Corrie, which brought winds of more than 90mph to Stornoway in the Western Isles of Scotland late on Sunday.

The storm then pushed into the North Sea in the early hours of Monday, leaving cold and blustery conditions behind.

Rail services between Edinburgh and Newcastle were suspended on Monday morning with the line being closed due to continuing strong winds and heavy rain.

Network Rail said it was carrying out safety checks in a bid to reopen the line.

Passenger trains between Edinburgh and Newcastle will initially be required to run at slower speeds than normal even once the line reopens, leading to further delays.

Much of the ScotRail network has been affected by the severe weather.

The operator warned passengers on Monday that it has only been able to arrange “very limited replacement transport”.

Schools in Aberdeenshire are among those expected to delay opening or remain closed on Monday due to a lack of power or heating.

A nine-year-old boy in Staffordshire and a 60-year-old woman in Aberdeen died after trees came down during Storm Malik on Saturday.

The strongest gust from Storm Malik over the weekend was 93mph in Brizlee Wood, Northumberland, but there were also winds over 70mph elsewhere in England’s north.

In Scotland, winds of 92mph were recorded in Stornoway, on the Western Isles, as Storm Corrie hit.

It comes as northern Scotland faces another Met Office warning for Tuesday.

Forecasters said strong winds are expected to develop through the day with gusts reaching as high as 65mph across northern Sutherland, Caithness and Orkney.

Although the speeds are less than in storms Malik and Corrie, the Met Office said “recently weakened trees and structures could be prone to further damage”.

The yellow warning, which will be in place from 6am to 6pm, states the winds “may lead to some disruption”.