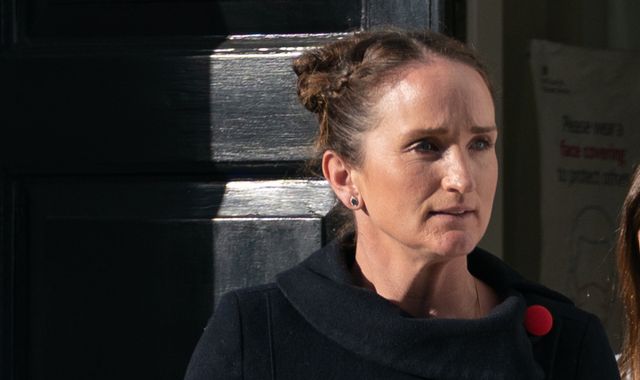 A former primary school teacher has indicated she will plead not guilty to animal cruelty charges after she was accused of punching and kicking a horse.

Sarah Moulds appeared in court after a video was shared online which appeared to show a woman repeatedly hitting the animal when it ran into the road.

The footage led to Ms Moulds losing her job at the Mowbray Education Trust in Melton Mowbray, Leicestershire, in December last year.

Appearing at Boston Magistrates’ Court, the 37-year-old spoke only to confirm her name, address and date of birth and that she indicated she would give pleas of not guilty during a brief hearing.

Ms Moulds is accused of two offences under the Animal Welfare Act against a grey pony called Bruce Almighty.

The RSPCA allege she caused him unnecessary suffering by “kicking and hitting” him, and by failing to take reasonable steps to protect the animal from pain, suffering, injury or disease.

The date of the allegations is 6 November last year, in the area around The Drift in Gunby, Lincolnshire.

Ms Moulds is reported to have been participating in the Cottesmore Hunt, one of Britain’s oldest foxhound packs, when the alleged incident occurred.

The RSPCA investigated the footage of the alleged incident that had been posted by the Hertfordshire Hunt Saboteurs, activists who are against hunting.

The animal charity had appealed to the public for information, describing the video as “really upsetting”.

The backlash led to Ms Moulds being removed from a voluntary position at a local pony club, while the Cottesmore Hunt said a “thorough internal investigation” had meant a “follower will not participate in trail hunting” with them.

The former teacher was granted unconditional bail and will now face a trial.

Ms Moulds, of Somerby in Melton Mowbray, Leicestershire, will appear at Lincoln Crown Court for a plea hearing on 28 February.

Share
Facebook
Twitter
Pinterest
WhatsApp
Previous articleMadeleine McCann: Suspect claims it would have been ‘absurd’ for him to have abducted her
Next articleSue Gray report: No 10 parties ‘represent a serious failure’ and ‘difficult to justify’ as PM says sorry