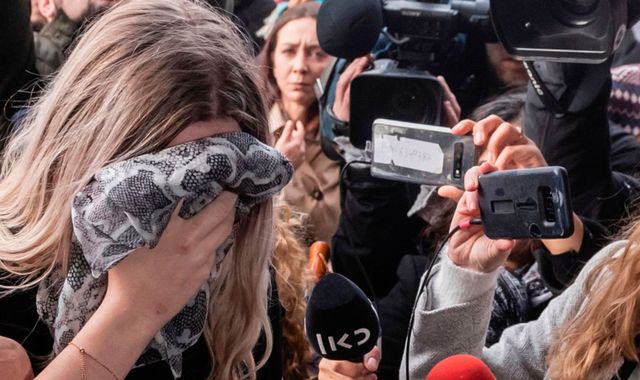 The now 21-year-old university student has maintained she was pressured by officers in Cyprus to withdraw the allegation and has vowed to clear her name having flown back to the UK after being sentenced.

Michael Polak, director of Justice Abroad, who coordinated the appeal, told Sky News the woman and her family are “really happy” about the “landmark decision”, adding that it is a “very emotional time” for them.

“For the family it’s a big moment, and they put themselves through a lot to establish her innocence,” he said.

He said they will immediately request a “proper investigation” of the rape allegations by a different police force in Cyprus and they hope authorities will “do the right thing”.

Mr Polak said there were no police recordings in the station either.

“There were lots of defence rights in this case which haven’t been protected,” he said.

Mr Polak said the trial judge, Michalis Papathanasiou, “was against us even before any evidence was called”.

He said he did not allow any evidence related to the rape allegations and had shouted seven times: “This is not a rape trial”.

He said Mr Papathanasiou had already decided no rape had taken place and had failed to understand the offence of public mischief, which requires a false statement of a make-believe crime.

Police investigation of rape claims was a ‘failure’

The judge was also accused of ignoring defence expert evidence and not taking account issues with the police investigation, which Mr Polak said was a “failure”.

He alleged there was evidence the crime scene was left unprotected, TV teams were able to get into it and found relevant evidence the day after the report, and suspects were placed all in one cell together so they could “put their stories together”.

Mr Polak said the implications of this victory for women who come forward about rape are substantial.

“This is not just a massive decision for her, but it will have repercussions around the world.

“Countries need to look at how they’re dealing with young people and young women who make these complaints.”