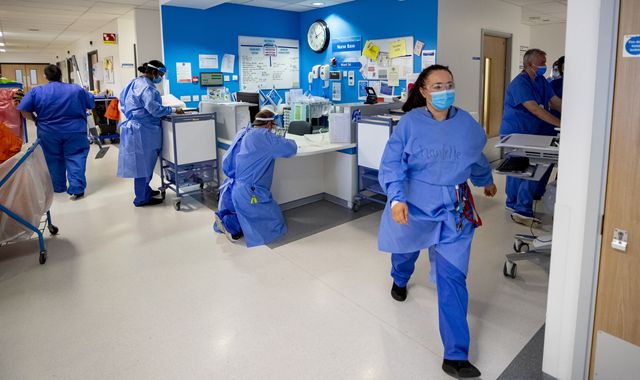 Boris Johnson has said the health secretary will be saying more later about mandatory coronavirus vaccinations for NHS staff and social care workers, amid speculation the policy could be scrapped.

Health workers in England were meant to be fully vaccinated against COVID-19 by April, but Sajid Javid has been under growing pressure to get rid of the rule.

There have been concerns that the sector could be left with a massive staffing crisis due to the number of workers choosing not to be vaccinated.

Asked if the government was about to perform a U-turn, the prime minister said: “My view on NHS workers, everybody involved in looking after vulnerable people, all healthcare professionals should get a vaccine. That’s absolutely clear.

“I think that Sajid Javid, the health secretary, is saying a bit more later on about how you might deal with different variants of coronavirus because they have different implications when it comes to transmission.”

Speaking to Kay Burley on Sky News earlier, Chief Secretary to the Treasury Simon Clarke said the current coronavirus situation “does open a space” to look again at the policy.

Mr Clarke said Omicron was now the dominant variant of COVID and was generally resulting in milder disease than other strains.

“Any decision that’s taken this week will reflect that reality,” he said.

“I can’t prejudge the decision that is going to be made, but obviously we do recognise those realities and that does open a space where we can look at this again.”

According to the Daily Telegraph, the health secretary will meet ministers on the COVID-operations cabinet committee on Monday, where he is expected to confirm the U-turn.

Mr Clarke said the policy of mandatory jabs is something that ministers have “always kept under review”.

Conservative MPs welcomed news of the expected U-turn, with Romford MP Andrew Rosindell writing on Twitter: “These free-thinking NHS workers’ jobs are saved and quite right too.

“Well done all those who had the courage to stand up for the values of a free society.”

Forest of Dean MP Mark Harper added: “My backbench colleagues and I have been pushing hard to spare the sack for tens of thousands of NHS and care workers.

“It beggars belief that the PM and health secretary kept insisting on bulldozing this policy through, despite warnings of staff shortages, for so long.”