COVID-19: Bereaved support bubble plan rejected by No 10 as it ‘would send wrong message to public’, PM’s ex-aide claims 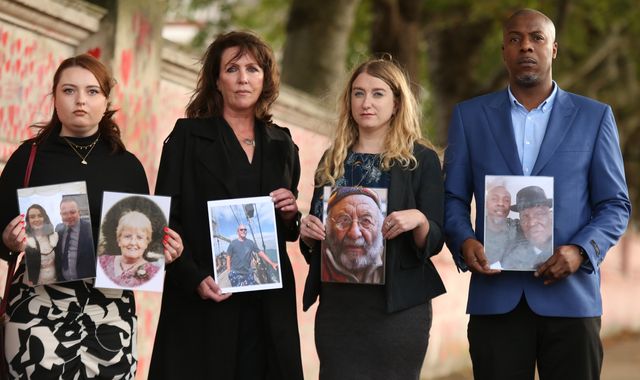 Downing Street vetoed plans to allow those who had lost loved ones during the pandemic to form bereavement support bubbles when 2021 lockdown restrictions began to ease, Boris Johnson’s former aide has claimed..

In an article for The Times, Nikki da Costa – the prime minister’s former head of legislative affairs – said a proposal to allow families to meet indoors to support one another through their grief was rejected by Number 10 because it was thought it would “send the wrong message to the public”.

The policy would have allowed those who had lost close family, had a miscarriage or been through the stillbirth of a child or neonatal death to form bereavement support bubbles.

Ms da Costa, who left her role in Downing Street in September 2021, claims the decision not to go ahead with bereavement bubbles came just weeks before Number 10 staff held parties on the eve of Prince Philip’s funeral in April 2021.

She said she felt “frustrated” to hear some in Downing Street calling for the public to get “a sense of proportion” when they had knowingly taken decisions against COVID rules themselves.

“As we prepared the road map out of lockdown in 2021, I and others pushed again for a policy that had been discounted previously because infection rates were so high: to allow bereavement support bubbles for those who had lost close family, suffered miscarriage, the stillbirth of a child or neonatal death,” Ms da Costa wrote in The Times.

“It was worked up as an option for Step 2, the transmission impact would not have been significant, and it was included in a submission to the prime minister. Three days later it was unpicked.”

Ms da Costa said Number 10 vetoed the plans as it was thought that an expansion of support bubbles “would signal that everyone could relax their guard”.

“And this is why I am angry when I see some saying it’s important to get a sense of proportion, because if we in Number 10 could be that hard-hearted because we thought it was the right thing to do, then those involved in those kinds of decisions also owed it to the country to be as hard on themselves and their own conduct,” she continued.

What were the COVID support bubble rules?

The government introduced COVID support bubbles in June 2020 which allowed adults living alone or single parents living alone with children under the age of 18 to mix indoors without adhering to social distancing rules.

The police allowed elderly people who were living alone and not shielding to form a bubble with one friend or family member and couples who did not live together to visit and stay with each other – so long as one of them was living alone.

The support bubble rule allowed those eligible to group with another household and, together, to be treated as a single household.

It meant they could visit each other in their homes rather than meeting outside as everyone else had to at the time.

In her newspaper article, Ms da Costa also said Downing Street officials have “failed” to be “honest and upfront” about the allegations of parties held in Number 10 and across Whitehall when COVID rules were in place.

Ms da Costa, who also worked for former PM Theresa May, wrote: “If we in Number 10 could be that hard-hearted because we thought it was the right thing to do, then those involved in those kinds of decisions also owed it to the country to be as hard on themselves and their own conduct.”

She added: “If Number 10 failed in that as a collective, as it seems clear, it needs to be recognised as a failure of and by those at the top.”

Her comments come as the wait for the report into “partygate” to be published continues.

Compiled by senior civil servant Sue Gray, the report is expected to be heavily redacted following a decision by the Metropolitan Police to start its own inquiry into the events.

Last week, the force has asked Ms Gray to include “minimal reference” to parties that will form the basis of its inquiries.