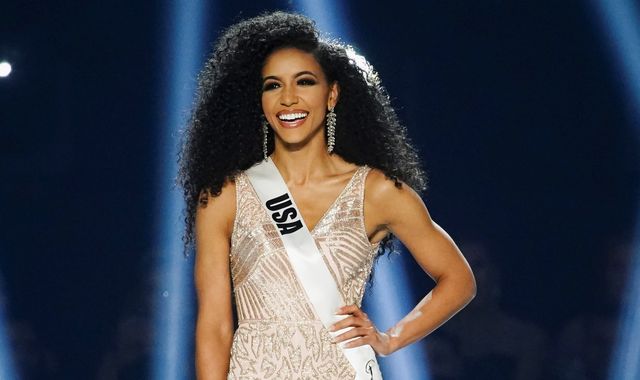 Police said she fell from an apartment building in Manhattan, New York, and her death was most likely the result of suicide.

She was pronounced dead at the scene on West 42nd Street, where her body was found at about 7am on Sunday morning.

Her family said in a statement: "In devastation and great sorrow, we share the passing of our beloved Cheslie.

"Her great light was one that inspired others around the world with her beauty and strength.

"She cared, she loved, she laughed and she shined.

"Cheslie embodied love and served others, whether through her work as an attorney fighting for social justice, as Miss USA and as a host on Extra.

"But most importantly, as a daughter, sister, friend, mentor and colleague – we know her impact will live on."

Kryst won the Miss USA pageant in May 2019 and was a top 10 finisher in the Miss Universe competition that year.

When she was crowned, it made history as it was the first time three black women were the reigning Miss USA, Miss Teen USA and Miss America, according to NBC New York.

Although her fame came from her pageant achievements, she was also a lawyer who worked for a firm based in Charlotte, North Carolina.

Kryst was born on 28 April 1991 in Jackson, Michigan, and went to high school in South Carolina before graduating with honours from the University of South Carolina.

She earned a law degree and a master’s of business administration from Wake Forest University.

Kryst told the North Carolina Bar Association’s blog in 2019 that she was inspired to enter pageant competitions by her mother, April Simpkins, who was Mrs North Carolina in 2002.

"Her title provided her with a platform to advocate for issues that were important to her and people listened," Kryst said.

It took Kryst five tries to win the North Carolina title before she went on to take Miss USA.

She acknowledged her tenacity by citing a quote widely attributed to Winston Churchill: "Success consists of going from failure to failure without loss of enthusiasm."

Her time at the Charlotte offices of the law firm Poyner Spruill LLP appeared to be fruitful, reaching the position of diversity adviser in 2020 after her pageant sabbatical in 2019.

Kryst received an Emmy nomination in 2020 for her work as New York correspondent at Extra, a popular entertainment programme in the US.

Extra, which is produced by Warner Bros Television Distribution and is widely syndicated on local network TV affiliates, said in a statement: "Our hearts are broken.

"Cheslie was not just a vital part of our show, she was a beloved part of our Extra family and touched the entire staff."

Kryst provided commentary at last month’s Miss Universe pageant, which called her "one of the brightest, warmest, and most kind people we have ever had the privilege of knowing".