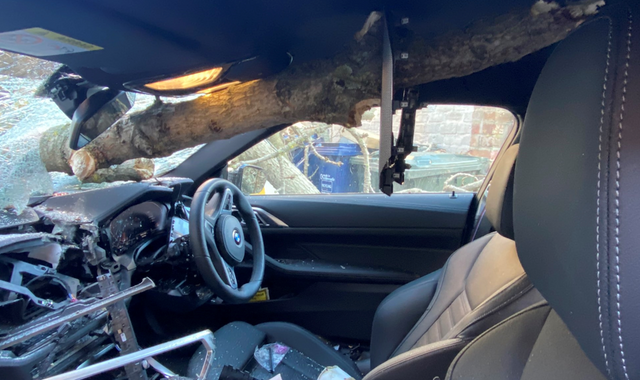 Ice warnings have been issued by the Met Office as thousands of people are still without power following Storm Malik – and a second storm is set to hit the UK in a matter of hours.

Corrie will bring winds of up to 90mph in some exposed coastal locations and mountainous areas of Scotland.

Around 34,000 customers are still without power across the north of England and Scotland, power companies have said.

Yesterday, a nine-year-old boy in Staffordshire and a 60-year-old women in Aberdeen were killed by falling trees.

On Saturday, a group of kayakers also had to be rescued after becoming stranded on an island river amid strong winds and waves. Kent Police and a marine unit got as close as possible before officers swam ashore, negotiating 100m of thick mud to help those stuck.

Now, amber and yellow severe weather warnings for wind are in force, which state “flying debris is likely” with possible damage to trees and buildings.

The Met Office warning said: “Injuries and danger to life is likely from large waves and beach material being thrown onto coastal roads, sea fronts and properties.”

“Storm Corrie will bring gusts of up to 90mph in exposed coastal locations in northern Scotland, with 70-80mph gusts more widely in the north.”

The Met Office has also said that most of Scotland north of Perth will see wintry showers and falling temperatures that will allow ice to form, increasing the likelihood of accidents.

‘Hunker down for next 24-hours’

Robert Colburn, emergency response manager for Red Cross Scotland, said he and his team are “ready and on standby” if required.

He told Sky News people should be prepared to “hunker down for the next 24 hours if required”.

“All of these things, anything that is weather, you can do your preparation but you just have to sit and wait and see what happens when it actually hits,” he said.

“There are lots of things that people can do preparing – this afternoon, for example, prepare to stay at home. If you don’t have to go out, certainly don’t go out. Have your mobile phone charged. Have available battery-powered radio and torches, just in case you get a power outage. Have easy to prepare snacks in the house, bottles of water.”

A nine-year-old boy died after a tree fell on him and a man in Winnothdale, Staffordshire, at around 1pm on Saturday.

Both were taken to Royal Stoke University Hospital, where the boy passed away and the man remains for treatment.

Separately, a woman died after being hit by a fallen tree in Aberdeen.

Sky Sports reporter Keith Downie shared images of damage after his three-month-old car was crushed by a falling “100ft” tree which “broke off during the storm… fell down onto the side of the house, bounced off the side wall and careered through both of the cars”.

He told Sky News: “It’s a scene of utter devastation, I have to say. I was pretty badly shaken all day yesterday knowing how close that I was to it when it came down.

“And I suppose aided by the fact that I’m working tomorrow and it’s transfer deadline day for Sky Sports News and I cover Newcastle United and I’m expecting it to be a pretty busy day as far as potential transfer business is concerned.”

Northern Powergrid has said 16,000 customers are still without power, almost all of whom are in Northumberland and County Durham.

Teams are working to repair any damage but said it is not as severe as that seen by Storm Arwen, which makes the work less challenging.

And in Scotland, engineers remain on “red alert” and 18,000 people are still without power.

Northern Powergrid says: “We are working with our partners to support the communities affected – including making financial support available for people still of supply today to get a hot meal and, where it is needed, help cover the cost of alternative accommodation.”

It adds that teams are already in place to help repair the areas damaged by the storm.