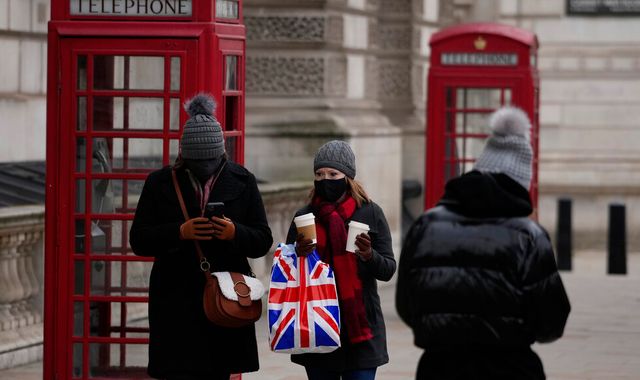 It’s the lowest number of cases reported since 14 December, when there were 59,610.

The figures compare with the 72,727 infections and 296 deaths that were confirmed yesterday, and 78,317 and 75 reported this time last week.

The latest government data doesn’t include the deaths and cases figures for Northern Ireland because they weren’t provided in time.

The latest figures come as vulnerable children aged between five and 11 are now eligible for their first jab.

Some 500,000 children who are either most at risk of coronavirus or live with someone vulnerable are now able to get their jabs.

What are the COVID rules across the UK and how do they differ between nations?

Joseph Aquilina, 45, a neurodiversity consultant from Thames Ditton, celebrated the “lucky” opportunity for his son Xavier, 11.

Xavier, who has benign rolandic epilepsy, said: “It is exciting to be able to be less vulnerable.”

Asked what message he would tell other children about the vaccine, he said: “It is not as stressful as you may think, everyone here is quite nice, and you get a sticker at the end.”

On Friday, England’s R reproduction number was reported to have fallen to between 0.7 and 0.9 – compared to 0.8 and 1.1 the week before.

The latest figures from the UK Health Security Agency (UKHSA) mean that every 10 people infected with coronavirus will on average pass the disease to between seven and nine other people.

Researchers used the colourless, odourless, tasteless and chemically non-reactive gas xenon to investigate possible lung damage in patients who have not been admitted to hospital but still experience the symptom.

Initial results of the Explain study suggest there is significantly impaired gas transfer in the lungs to the bloodstream in long COVID patients – despite other tests including CT scans coming back normal.