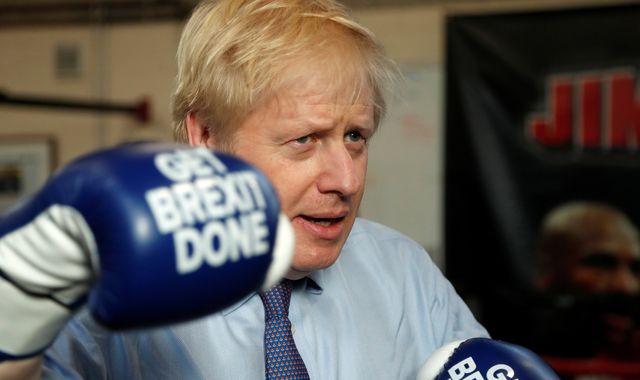 To the observer, watching MPs trying to remove their prime minister looks a little like the political equivalent of a boxing match.

Yes, it’s possible to score a knockout in one fell swoop. But to do that, you’ve got to land a big punch in the right place.

Moreover, if you miss, you’d better get on the attack again sharpish before your opponent has chance to catch their breath.

What we’ve seen over the last week is a battered Boris Johnson picking himself up off the mat as his adversaries stare at their gloves and wonder whether their fists were quite as furious as they had first thought.

Big domestic and international issues have helped the prime minister.

This week will see him – take a deep breath:

• Mark the anniversary of Brexit by bringing forward deregulation plans

• Potentially unveil cost of living support ahead of huge rises in energy prices.

These are all serious topics in their own right. But, be under no illusion, they play a part in the prime minister’s political recovery as well.

Rebel Conservative MPs may find it harder to agitate for a confidence vote in Mr Johnson if, at the same time, he’s inspecting troops in the snowy wilds of eastern Europe.

It may all look especially awkward for members of the 2019 “Red Wall” intake if they are attempting to remove a prime minister on the same day he’s announcing investment in their patches.

The confirmation that the controversial rise in national insurance is going ahead also gives us an indication that Mr Johnson’s political stock may be in the ascendancy.

Shelving the manifesto-busting hike would have placated many of the backbenchers that have been gunning for him.

The fact he has now explicitly committed to it tells us the man in Number 10 believes he still has the political authority to push through something that’s hated by many in his party.

But perhaps the two biggest catalysts of this recent reprieve came from developments that at first looked damaging.

The defection of Bury South MP Christian Wakeford to Labour sapped urgency and venom out of the plot to remove the prime minister.

More crucially, the launch of a police inquiry into “partygate” allegations – and the resulting delay in the publication of the Sue Gray report – stunted the building political crescendo and gave Mr Johnson time to dust himself off.

The Metropolitan Police’s request for “minimal reference” to some Downing Street events also lessened the likelihood of a knockout blow arriving in the form of an unredacted report full of gory details around who knew what about government gatherings.

Read more:
What could the Gray inquiry mean for Boris Johnson?
What’s the difference between the police inquiry and Sue Gray’s?

However, this isn’t to say the prime minister will be able to return to full strength.

Many Conservative MPs agree the partygate scandal has permanently hobbled Mr Johnson and inflicted numerous chinks in his political armour.

This at a time when he’s facing huge pressure over rising prices and the cost of living, as well as ballooning NHS waiting lists.

The local elections in May are another point of danger and the first post-partygate test of whether the prime minister is still an electoral asset.

Then there’s the chance of a sucker punch arriving in the coming days.

Even with redactions, the Gray report may still be critical enough of Mr Johnson to trigger a rush to remove him.

That may be compounded by leaks of damaging information or other interventions intended to take down the government.

It could all be exaggerated if there’s suspicion of a cover-up, with the most serious allegations removed from the Gray inquiry outcome.

All in all, the prime minister starts the week bruised by recent events but still on his feet. That, for now anyway, will be chalked up as win.