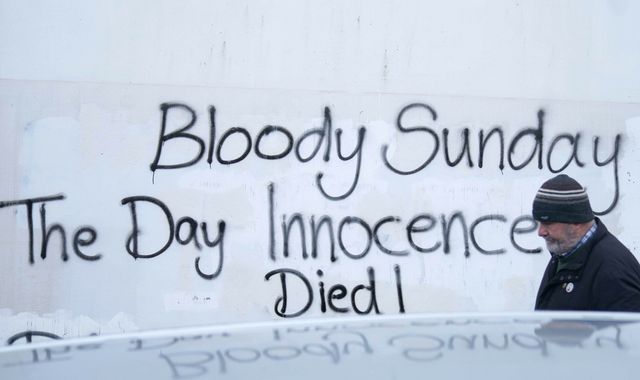 They retraced the route of the civil rights march that took place in Londonderry on 30 January 1972 and remembered the loved ones who did not come home.

“My older brother Jackie, 17 years of age, taken away for nothing, shot running like myself that day, running for cover,” recalled Gerry Duddy.

Caroline O’Donnell, whose father was shot on Bloody Sunday, said they were still fighting for justice because “murder is murder”.

Thirteen people were shot dead and a 14th fatally wounded when members of the British Parachute Regiment opened fire that day.

Hundreds gathered around the modest Bloody Sunday monument in the Bogside, among them Ireland’s prime minister, Taoiseach Micheal Martin.

Having laid their wreaths, families stood in silence, but when it came to the government’s de-facto amnesty for veterans, they did not mince their words.

Mickey McKinney, whose lost his brother Gerard, said: “We send a very clear warning to the British government.

“If they pursue their proposals, the Bloody Sunday families will be ready to meet them head on.”

“We will not go away, and we will not be silenced,” he added.

Mrs McDonald said: “It’s very humbling to be here in Derry 50 years on, generations on from that awful atrocity on that awful day.”

“Ironically, at the time when the British government now believes that they can grant an amnesty and impunity to their armed forces,” she added.

At the precise moment the first shot was fired on Bloody Sunday, relatives fell silent in the Millennium Forum theatre.

The actor Adrian Dunbar, who hosted the memorial event, described Bloody Sunday as “a tragedy made worse by a travesty”.

He said: “Bloody Sunday, one of the darkest days since the foundation of Northern Ireland, Derry’s Sharpeville.

“A hammer-blow from a callous and cruel government designed to squeeze the sense of freedom out of the people of Derry and to choke the struggle for civil rights for all, regardless of political hue or persuasion.”

He commended the Bloody Sunday families, who received a standing ovation as the choir sang: “We shall overcome.”