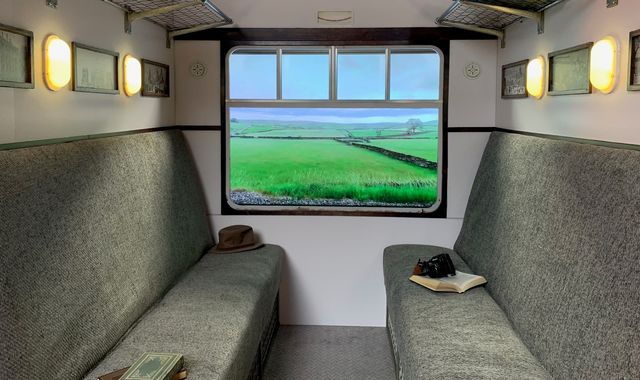 A visit to Greater Manchester film studio The Vectar Project is an eye-opening experience. But as is so often the case in the film and TV business, all is not as it may first appear to be, even to the industry insider.

The film sets on display here play a double trick on the eye. Buildings with no backs, steel doors that aren’t made of steel, and train carriages that are going nowhere are established tricks of the trade for the set designer.

But what makes these sets different is that they’re not made out of the usual wood, MDF and plastic. They’re all made from cardboard.

And in an industry that in recent years has been encouraged to reduce its environmental impact, cardboard could be a game-changer. It’s 80% cheaper than a traditional wood or MDF set, it has a carbon footprint that’s 90% lower, and it’s 100% recyclable.

"Our industry does amazing work in increasing awareness of the climate crisis, but often has no alternative but to add to the damage," says Tom Henderson, from The Vectar Project.

"Every year we build thousands of studio sets from wood and MDF, then dump them the moment the shoot is over. It makes me and others in the industry sick to see how much we waste, but now there is another solution."

Tom had his cardboard Eureka! moment during a shoot in the Caribbean for a TV commercial. The carbon footprint of the project was huge, so Tom decided there had to be another way.

He teamed up with cardboard artist Chris Gilmour, who has been working with the material for over 20 years and can pretty much make anything from it.

His previous works have included full-size replicas of an Aston Martin DB5 (complete with ejector seat and spoked wheels), a dentist’s chair, and The Beatles guitars (complete with strings), all made completely from cardboard.

So a jail cell door or the wooden beams of a Tudor house are comfortably within his abilities.

"It’s such a versatile medium," Chris says. "And the Vectar board that we use is really strong too. So, we can build lightweight sets, that can also be load-bearing, which is something we couldn’t do before."

The wood used for the cardboard is sourced in Sweden and comes from trees that are harvested for their branches, rather than chopped down entirely. The company says it’s a completely sustainable method that provides 100% recyclable materials.

The sets are not only cheaper and less environmentally harmful, they also help save time during production. The fact they can be moved easily by one or two people, unlike much heavier wooden sets, means that they can be repositioned much more quickly, saving time and money.

‘I imagine there could be all kinds of benefits’

Environmental groups are keen to see the impact the cardboard innovations can have.

Mike Berners-Lee, from Carbon Footprinting UK, says: "You know, I can imagine that cardboard film sets could be easy to make, easy to take down, easy to store away afterward, reused for other purposes, I can imagine there could be all kinds of benefits, and it’s just taking a bit of creativity from someone to get it off the ground."

The good news for Vectar, and its hopes of cleaning up the industry, is that many companies are getting on (card) board.

In just six months, Tom and Chris’ work has generated interest and support from ITV, BBC, BAFTA, Creative England, The National Theatre and the Royal Shakespeare Company. They are also working with the Berlin Film School and German TV channels, as well as companies in Canada, Australia and throughout Europe.

Remarkable to think that the environmental sustainability of film production may soon owe a debt to a company, based on an industrial estate in Greater Manchester, that can make humble cardboard look like anything you want it to.

Share
Facebook
Twitter
Pinterest
WhatsApp
Previous article‘I became the devil’: The trauma of the woman wrongly suspected of murdering an entire family in Clydach
Next articleCardboard could be a game-changer as film and TV industry looks to clean up its act