Boris Johnson: The former ‘red wall’ towns where people want to move on from partygate 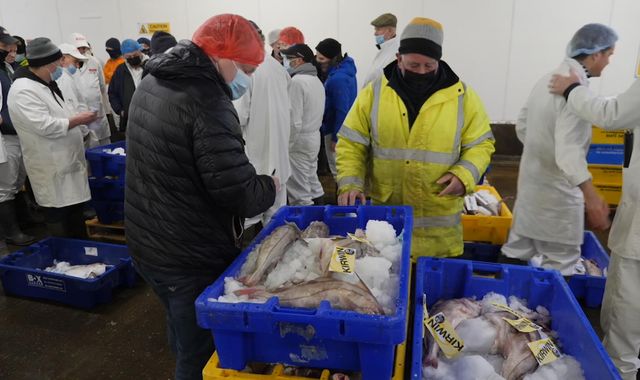 The constituency of Great Grimsby in North East Lincolnshire was part of the so-called “red wall” of Labour seats which collapsed at the 2019 election – Great Grimsby was won by the Conservatives for the first time since 1935.

How voters view partygate will be crucial in places like these Lincolnshire constituencies – along with their perceptions of Boris Johnson and whether he broke the rules he made and is fit for office.

But in Great Grimsby, the sense of great expectation exuded by Westminster in anticipation of the Sue Gray report is hard to find.

And the overwhelming message is that people are tired of hearing about partygate and want to move on with their lives after the trauma of the pandemic.

Grimsby’s fishing heyday has long gone. On the day we visited the fish market, they were selling cod and haddock to traders – and all of it had come from Iceland. But there seemed little interest in the forthcoming Gray report.

Boris Johnson visited the fish market on the campaign trail in 2019, and he impressed traders with his Brexit message.

Patrick Salmon, owner of Alfred Enderby fish smokers, said: “Whether somebody has a party, it doesn’t affect my economy or my businesses.

“Yes, it’s bad form, but I’m not convinced any other person would have done any differently.”

Read more:
What could the Gray inquiry mean for Boris Johnson?
Tory MP becomes first to say he would run against Boris Johnson

Message in a Bottle is a bottle shop and weekend bar in Cleethorpes. Pouring over the specialist beers, we met commercial divers Kyle Turnball, Andy Waters and Dylan Cowen.

I asked them if they personally knew anyone who was angry with Mr Johnson over allegations of “bring your own bottles of booze” gatherings and other alleged lockdown breaches. They all chorused: “No.”

But Mr Waters, from Grimsby, raised the spectre that there will be people in this part of the world for whom partygate will cost the Conservative Party votes.

Mr Waters says he’s never voted in his life, apart from for Brexit.

But he says: “I think there’s a lot of people who will not vote for him again because of everything that’s happened. He’s done a good job on other things, and there’s more pressing things in the world now than talking about garden parties and cakes. It’s what he does for the country, not when he’s at home.”

Kyle Turnball says of the prime minister: “I like him. I’m from a mining village, so I’m not supposed to like him. I don’t want him to leave, I hope he does stay in power even if he broke the rules.”

Dylan Cowen says he believes there’s too much focus on partygate.

He says: “Keeping the country going far overshadows what slice of cake he had.”

“Fine them and move on,” says Lyn Robinson.

The Cleethorpes group – like every other social group – couldn’t meet in lockdown.

“Let’s get on with running the country now. It’s like a witch hunt. I would still vote Conservative,” says Ms Robinson.

The ladies meet at the Cleethorpes shop, L and C Fabrics. The owner of the shop, Lisa Diable, says the prime minister should be held accountable, but then the country should park partygate.

Susan Jenkins is the only one in the group who didn’t vote Conservative at the last election. She is angry with Mr Johnson, labelling him a “buffoon” and says he’s “not fit to be prime minister”.

She says: “He’s the prime minister, and he should not be breaking the law under any circumstances.”

But like the others, she’s had enough of the saga.

She says: “Everybody is fed up of it all, and it doesn’t matter what party you’re in because people want to get on with their lives, and they can’t because of all this that’s going on in parliament.”