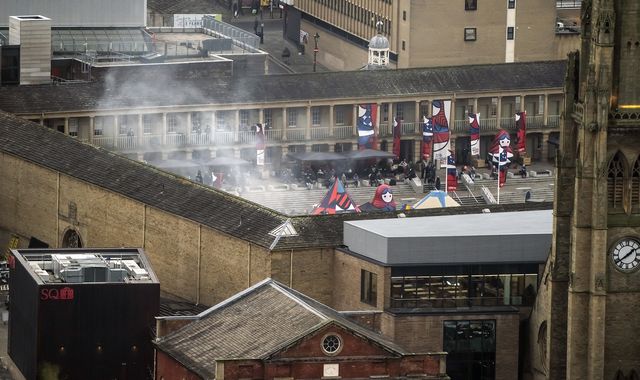 Hollywood actors including Samuel L Jackson have been spotted filming at a tourist attraction in West Yorkshire for a new Marvel show.

Filming for the comic book franchise’s new Disney+ show Secret Invasion is under way at the Piece Hall in Halifax, with Emilia Clarke and Kingsley Ben-Adir among the big names involved.

The show, which features Jackson reprising his ongoing role as Nick Fury, is based on the comic book of the same name, which sees a group of shapeshifting Skrulls infiltrate the planet.

Ben Mendelsohn was also among the stars seen at the venue, waving to fans as he stepped out his vehicle on Friday.

The Australian actor, who has also appeared in Star Wars and The Dark Knight Rises, continues in the role of Talos in the show.

Also pictured in Halifax on Friday was Kingsley Ben-Adir, star of Vera and One Night In Miami, as well as stunt doubles for Samuel L Jackson.

Game Of Thrones star Clarke was seen earlier in the week in the town, as was How I Met Your Mother star Cobey Smulders.

Businesses in the 18-century Piece Hall have closed during filming, with locals reporting explosions and smoke coming from the venue.

Secret Invasion has also been filming in nearby Leeds and Huddersfield – and is set to move to Europe to continue production.

The show, which will also star Olivia Colman, is part of the so-called fourth phase of the Marvel Cinematic Universe, which follows the events of Avengers: Endgame, and has so far featured titles such as Loki, Eternals and Spider-Man: No Way Home.

It’s due for release at some point later in the year on Disney+, though an exact date is yet to be announced.