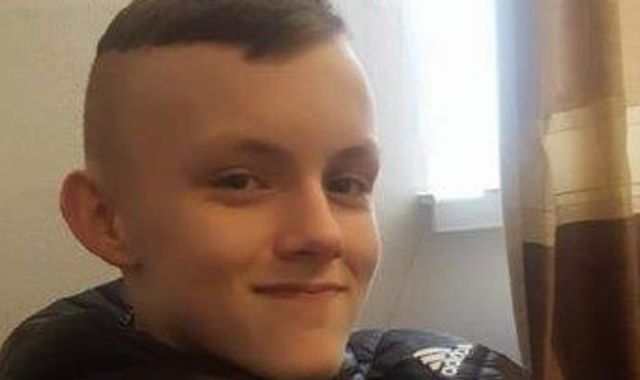 The heartbroken family of a teenage stab victim has laid bare their grief – as they urge anyone with information to help bring his killer to justice.

Kennie Carter, 16, was fatally wounded in the chest in Stretford, Greater Manchester, on Saturday, 22 January.

A murder investigation was launched after police were called to the scene in Thirlmere Avenue around 7pm.

So far detectives have questioned eight suspects and continue to make enquiries.

Now relatives of Kennie, who they described as their “cheeky chappy”, have pleaded with people in the community to come forward if they can help.

“Young lives like Kennie’s are being lost far too often and this has to stop,” grieving loved ones said.

In an emotional tribute, they added: “Kennie was our youngest, our baby, our cheeky chappy with baby blue eyes.

“His death has left a massive hole in our lives and our family has been destroyed.

“We will never have the opportunity to see him growing up and having a family of his own.

“Each day when we wake the house feels empty; we can’t hear his footsteps, his voice or his music.

“We want to ask the community to provide as much information as they can to the police so that the person responsible is brought to justice.”

Eight boys aged between 14 and 17 have been arrested on suspicion of murder.

Five have been bailed pending further enquiries and three have been released with no further action.

High visibility police patrols have been deployed in the area in the wake of the tragedy.

Officers are also engaging with young people who might have been affected.

The Greater Manchester Violence Reduction Unit – made up of experts in areas such as education, youth justice, public health, police and criminal justice – has been work closely with schools to offer support.

Greater Manchester Police said in a statement: “We’re continuing to appeal and anyone with information – no matter how small it may seem – is asked to contact us.”