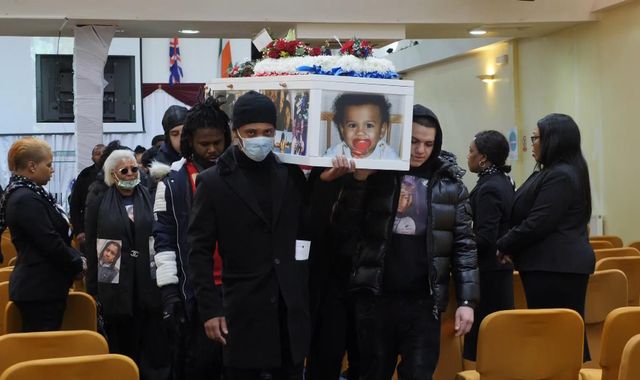 The youngest victim of a fatal stabbing in London last year was laid to rest on Thursday.

Jermaine Cools was just 14 when he was killed last November in Croydon, south London, in a record year for teen murders in the capital.

At his funeral, three of the pallbearers were schoolchildren. Seeing them carry a coffin covered in pictures of the teenager was a reminder this was another life cut too short.

Scores of well-wishers packed the Shiloh Church in Thornton Heath for the teenager’s funeral. Those gathered included his friends, family, members of the police force and the Deputy Mayor of London, Sophie Linden.

He said: “Our son was everything, to be honest.

“We’ve been living in a lot of pain, we don’t sleep at night, we just wake up and keep asking ourselves why?”

In a year in which 30 young people were killed, including five in Croydon, a borough some people have dubbed London’s knife crime capital, Julius also had words for young people involved in the violence.

“The knife is not a game thing, it’s a serious thing,” he added. “It’s not a toy. Take a book, read a Bible, sing a song. It’s not a toy thing and [like] a lot of people’s parents, we’re going through this pain.”

Mourners at the service watched a short video clip filled with pictures of Jermaine before they heard anecdotes from friends and family about someone his sister Amanie simply described as a “good boy”.

Another one of the pallbearers was his brother Scott Reynolds, who spoke in the service about playing PlayStation games with Jermaine, who would often buy him peanut fudge bars.

He said he “couldn’t breathe”, when he was looking down at the coffin as he spoke at the pulpit.

“I tried not to think of him in the coffin, it’s just sad,” Scott said. “To me, in life, it’s something I always know, you’re supposed to look after your younger brother and then me being on the stage and looking down on my little brother is something I didn’t want to do.”

This wasn’t just a funeral, it was a fightback. The community leaders who gathered wanted to use the day to signal to the police that tackling knife crime will take a joint effort between themselves, the police and parents.

But watching Jermaine’s friend and family grieve was a reminder the wounds caused by losing a loved one to knife crime will never completely heal.