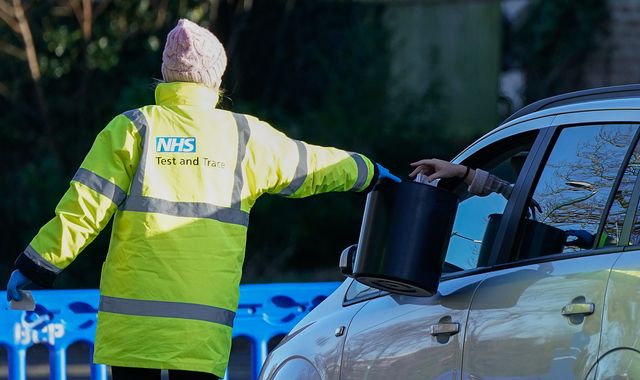 The UK has recorded 89,176 new COVID cases in the latest 24-hour period, according to official data.

A further 277 people have died within 28 days of a positive coronavirus test, according to the government’s dashboard.

The figures compare with 96,871 cases and 338 COVID-related deaths reported yesterday.

It comes as England’s R reproduction number has fallen to between 0.7 and 0.9.

The latest figures from the UK Health Security Agency (UKHSA) mean that every 10 people infected with coronavirus will on average pass the disease to between seven and nine other people.

The UKHSA said the number of cases each day is likely shrinking.

The daily growth of infections was estimated at between -6% to -2%, compared with -6% to +1% the previous week.

Meanwhile, the latest data from the Office for National Statistics (ONS) shows infection rates and hospitalisations decreased across England in the week ending 23 January.

However, the number of deaths involving COVID rose to 1,308 in the week ending 14 January.

And the number of deaths involving COVID was over four times higher (5,597, week ending 8 January 2021), according to the ONS.

Also, new analysis by the ONS has found an average of more than 350,000 daily new COVID cases in the UK likely occurred in early January.

That’s more than twice the official number reported on the government’s dashboard over the same period.

The figure is down from nearly 500,000 new cases a day estimated for the end of December – though this was nearly three times the dashboard total.