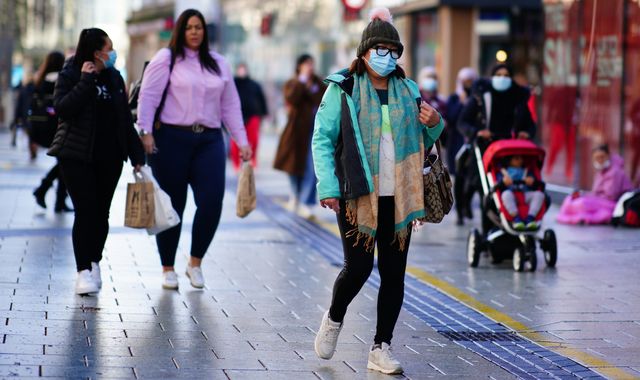 COVID rules in Wales are being further relaxed from today to alert level zero, after the nation passed the peak of the Omicron wave.

The lowest level of restrictions are now being imposed – meaning nightclubs will be allowed to reopen, and social distancing guidance will be scrapped.

The rule of six will no longer apply to gatherings in venues such as hospitality, cinemas, and theatres – and licenced premises will no longer need to only provide table service or collect punters’ contact information.

What are the different COVID-19 rules across England, Wales, Scotland, and Northern Ireland?

Crowds will be able to return to outdoor sporting events as the Six Nations rugby tournament kicks off next week – with Wales due to host Scotland at Cardiff’s Principality Stadium on 12 February.

The easing of restrictions brings to an end tougher rules that had been in place since Boxing Day.

However, COVID passes will still be required at larger outdoor events attended by more than 4,000 unseated guests, or 10,000 seated – as well as nightclubs, cinemas, theatres, and concert halls.

Although the Welsh government will continue to advise people to work from home, it is now no longer a legal requirement.

However, businesses, employers and other organisations must undertake a coronavirus risk assessment – and implement reasonable measures to minimise the spread of the virus.

The self-isolation period in Wales has also been cut to a minimum of five full days, effective from today.

The new rules mean people will be able to end their isolation as long as they have two negative lateral flow tests on days five and six.

It will bring the nation in line with the measures in place in England and Northern Ireland.

Health minister Baroness Eluned Morgan said: “After carefully reviewing all the available evidence, we believe that testing on days five and six together with five full days of isolation will have the same protective effect as a 10-day isolation period.

“But it is really important everyone self-isolates and uses lateral flow tests in the way advised to ensure they protect others from the risk of infection.”

Masks will continue to be required in most indoor public places in Wales, with secondary school pupils asked to wear face coverings until half-term.

This is in contrast to England, where the rule has been axed – although they are still required in some businesses and are mandatory on all Transport for London services, including the Tube.

What are the rules on face masks?

First Minister Mark Drakeford said the rules will be reviewed in three weeks on 10 February.

Restrictions have been eased gradually as part of a phased plan after cases peaked in Wales at just over 2,300 per 100,000 people in early January, before dropping back to round 500 cases.

Wales will face its first Six Nations clash against Ireland at the Aviva Stadium in Dublin, with fans able to cheer their teams on after the Republic of Ireland lifted the limit on spectators at indoor and outdoor events.