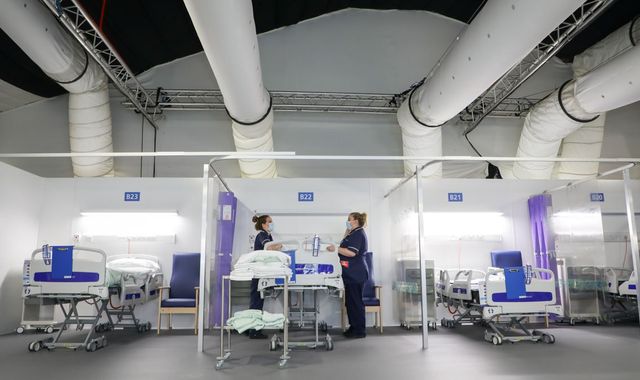 The Nightingale surge hub at Royal Preston Hospital has received its first patients.

The temporary structure is one of eight which were commissioned in December in preparation for a potential wave of Omicron admissions to hospitals.

The facility, in Lancashire, is looking after at least seven people who are described as “low acuity” patients.

They are not COVID-positive or seriously ill, but they need further treatment before they can be released into the community.

A spokesperson for the NHS in the North West said: “As part of a raft of action being taken, we have agreed a request from local leaders to temporarily use the Nightingale surge hub at Royal Preston for a limited number of low acuity patients.

“Staff will be drawn from across the local health service to ensure that patients transferred to the hub receive appropriate care, and that the impact on other services is minimal.

“We are supporting the health system in Lancashire and South Cumbria to continue to provide the best quality care possible for patients who need it, during a period of sustained pressure on services and staff due to the effects of Omicron all while pushing to deliver as many routine checks and procedures as possible, including vital diagnostic checks.”

The hub at Royal Preston is capable of caring for a maximum of 55 patients but Health Secretary Sajid Javid has previously said he hopes it and the other surge hubs “will not have to be used”.

Sky News understands that, although there are no patients at any of the other seven surge hubs, they will remain in place to be used if there is a spike in COVID-19 patients.

The Lancashire Teaching Hospitals Trust, which includes Royal Preston, had 26 free beds as of Thursday, meaning that around 96.5% were occupied.