Barry Cryer obituary: The comedy star and writer whose innate sense of humour and perfect comic timing kept us laughing for decades 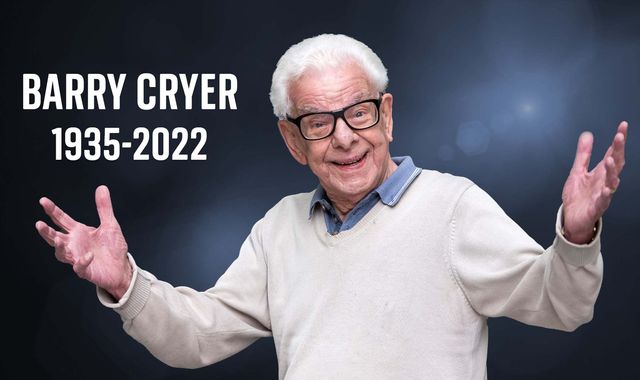 "I haven’t had a career, just a series of incidents," said Barry Cryer in 1998. "I’ve been dogged by good luck all my life."

But anyone who knew him, worked with him or loved his work knew it was much, much more than that.

Quite simply, Cryer, who has died at the age of 86, was an innately funny man, a prolific talent with impeccable comic timing and a punchline always readily available.

During a career that spanned seven decades, he was a presence on many much-loved TV series, a long-serving panellist on radio show I’m Sorry I Haven’t A Clue, and wrote for a generation of British comedians such as Ronnie Barker, Ronnie Corbett, and Tommy Cooper, as well as US stars including Bob Hope and Richard Prior.

Whether his jokes came from the pen or the stage, they made millions laugh over the years – and inspired scores of younger comics to follow in his footsteps.

Born in Leeds in 1935, Cryer went on to study English literature at university in the city before beginning his career in entertainment in variety theatre. After moving to London, he started writing for Irish performer Danny La Rue.

It was a chance meeting with the late David Frost at a nightclub that saw him move into the world of TV writing. It was the start of a long-running partnership, with Cryer going on to work on several Frost shows on both the BBC and ITV, including Frost Over England and Frost On Sunday.

"You can’t cater for that," Cryer once said of their meeting. "It’s serendipity. It just happened, and I’ve been in the right place at the right time quite a few times in my life."

The star also appeared on a string of panel shows, including That’s Showbusiness, Blankety Blank, and What’s My Line?, at the same time writing material for some of British comedy’s biggest names, including as one of the main writers on the hit show The Two Ronnies.

He was made an OBE in 2001 and was also a member of the entertainment charity the Grand Order of Water Rats. In 2018, he was given a lifetime achievement award for his comedy career by the British Music Hall Society.

Cryer also had another, more unusual addition to his long and distinguished CV – a surprise number one hit thanks to his cover of 1958 novelty song Purple People Eater. Already popular following its release, the comedian’s version gained success in the Nordic countries, achieving a number one in Finland.

Funny to the end, he launched the podcast Now, Where Were We? with one of his sons, actor and writer Bob, just a month before his death, featuring chats with famous pals he hadn’t seen since for a while due to the pandemic. Guests included Stephen Fry, Danny Baker, Miriam Margolyes and Sanjeev Bhaskar.

"There is some very explicit language used in punchlines from time to time," the synopsis for the show reads. "But Barry’s nearly 90, so it’s sort of delightful, isn’t it?"

Known as Baz by those who loved him, Cryer leaves behind Theresa, his wife of almost 60 years, and their children Tony, David and Jack, as well as Bob; grandchildren Ruby, Tom, Evan, Archie, Hope, Martha and Connie, and great-granddaughter Isobel.

Following his death, his family encouraged people to share their memories and "celebrate Baz", paying tribute to "a talented comedy writer and comedian" who they said actually preferred the terms "hack and entertainer" – and would joke that "the term ‘national treasure’ meant he’d just been dug up".

Cryer had a "gift for friendship (as anyone who still has a landline will testify) and a genius for putting people at their ease", they said, adding with his typical comic timing: "Oh yes, and he made many people laugh. A lot. Over many years."

Stars of comedy young and old also shared their tributes to and memories of "one of the absolute greats of British comedy". They paint a picture of a man who was always there for others, be it making birthday calls or taking the time to offer his words of wisdom.

His own advice to young comics? "You’ll get knocked back when you start, but keep coming back. Dust yourself down and pick yourself up. We all had it to start with and it will happen.

"But the good ones survive."