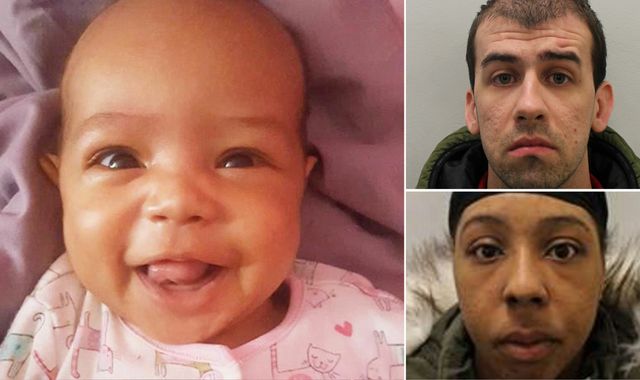 A couple have been jailed after leaving their eight-week-old baby with more than 60 broken bones before she died.

Benjamin O’Shea, 26, and Naomi Johnson, 24, claimed paramedics caused the fractures suffered by their daughter Amina-Faye – but they were found guilty of causing or allowing her to suffer physical harm.

O’Shea has been sentenced to eight years and eight months in jail, while Johnson was handed a prison term of seven years and two months.

In total, the little girl had 41 fractures to her ribs and 24 fractures to her limbs – with doctors concluding the injuries were “highly indicative that Amina-Faye had suffered continued physical abuse”, police said.

Their sentencing at Inner London Crown Court comes amid concerns about an increase in child cruelty cases in the UK.

Judge Nigel Peters QC said it was “sadly yet another harrowing case of parents abusing or being cruel to their child”.

What happened to baby Amina-Faye?

Johnson and O’Shea – a former army reservist – called 999 on the morning of 26 April 2019 after Amina-Faye stopped breathing.

The Metropolitan Police said there were no visible signs of injury and Amina-Faye was initially thought to have suffered a sudden unexplained death – but X-rays later identified her broken bones.

Some fractures were recent while others had started to heal, suggesting the baby had been repeatedly abused, the force added.

However, no cause of death was established – with police saying this meant murder charges could not be brought.

After Johnson and O’Shea were arrested, the couple claimed their daughter’s death was the result of a visit to the GP – blaming her inoculation – and that her bone fractures were caused by the paramedics.

There was also evidence of past bleeding inside Amina-Faye’s head, which had healed.

Officers also discovered texts in which O’Shea boasted of his military service when in fact he had been a reservist for a couple of years.

In one incident, O’Shea called NHS 111 – about three weeks before Amina-Faye’s death – to report that she was coughing blood, but he failed to act on a doctor’s advice to take her to hospital.

Detectives also found texts that showed Johnson and O’Shea admitting slapping and mistreating the other child, for which they were convicted.

Both Southwark Council and the Met Police told Sky News that no previous safeguarding concerns were reported to them before Amina-Faye’s death.

Helen Westerman, from the NSPCC, described the Amina-Faye case as “tragic” and said the country was “still reeling from the shock” of the recent murders of six-year-old Arthur Labinjo-Hughes and toddler Star Hobson.