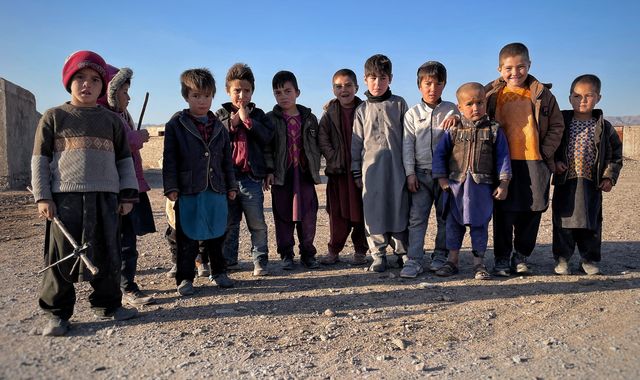 The Foreign Office has pledged to release nearly £100m in emergency funds to Afghanistan after a former UN chief warned “a million children will die” if unspent aid isn’t released quickly.

On Thursday afternoon, Foreign Secretary Liz Truss described a Sky News report showing how Afghans are resorting to desperate measures to feed themselves after the Taliban takeover as “extremely, extremely concerning”.

It came after Baroness Amos, a former UN under-secretary-general, told Sky News that if money wasn’t urgently sent into the country, there would “be three million children under five who will face acute malnutrition by March. Of those, a million children will die.”

The Foreign Office has now pledged £97m of emergency aid for Afghanistan this winter, which the department says will provide over 2.7 million people with food, health services and water amid a worsening crisis.

Last August, the UK government promised to double aid sent to the country, but up until now just £145 million out of £286 million has been dispersed.

The country is so starved, and its population so desperate, Sky News found parents resorting to selling their children and kidneys in order to feed their families.

The government said the latest allocation of support means the UK has now delivered on its promise to double UK aid.

Ms Truss said: “The UK continues to provide vital humanitarian assistance in Afghanistan. We have doubled UK aid this year to save lives, protect women and girls and support stability in the region.

“The funds announced today will mean essential food, shelter and health supplies will reach those who are most in need.”

Speaking to broadcasters earlier, the foreign secretary was asked about the Sky News report highlighting the desperation of the country’s population.

The Foreign Office said the funds announced today will also be used to help survivors of gender-based violence and provide support for essential child protection services.

Aid agencies will prioritise those most at risk and the funding will be primarily channelled through the UN Afghanistan Humanitarian Fund, World Food Programme (WFP), and United Nations Children’s Fund, the department added.

But Labour said the government’s efforts to help those in Afghanistan have been “simply not good enough”.

Labour’s shadow development minister Preet Kaur Gill said: “Just this week the government confirmed that barely half the monies promised for Afghanistan had reached the country. This is simply not good enough.

“The remaining £141 million should be released immediately.

“The UN have made an appeal for $4.4bn. Labour are calling on the government to convene a pledging conference as a matter of urgency.”

‘The tip of the iceberg’

Referring to Alex Crawford’s Sky News report from Afghanistan on Thursday, Sir Mark Lowcock, another former UN under-secretary-general for humanitarian affairs, said: “That graphic, compelling, heartbreaking set of stories is really the tip of the iceberg of what’s going on in Afghanistan right now.

“The vast majority of the population are starving and that is the reason people resort to these extreme measures.

“It’s not at all appropriate to enforce a sort of collective punishment on the total population of the country because you don’t like the regime that those people haven’t chosen.”

Afghanistan currently has billions of its own money stuck outside the country, frozen by foreign governments, which Sir Mark said could be released to pay teachers and health workers directly.

Mr Miliband said: “The World Bank is allowing staff employed by NGOs to be paid… We know that more than half the country’s civil servants are teachers; paying them through international institutions including the World Bank or UN institutions, has been done in other places, for example in Yemen.

“Paying public servants does not mean paying the people who are running their departments.

“We’ve haven’t got months to sort this out, we’ve got days. But it is sortable.”