What are the main points in Prince Andrew’s defence against Virginia Giuffre’s sex abuse lawsuit? 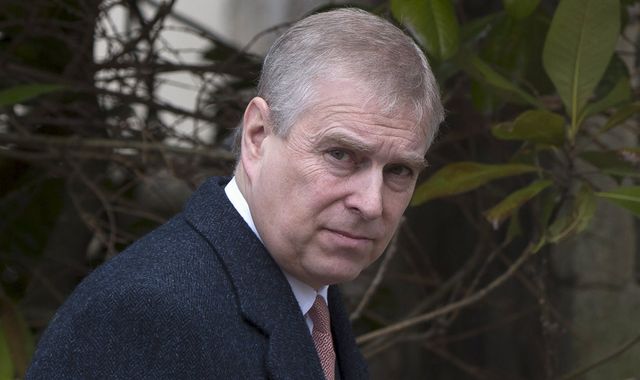 Prince Andrew has formally responded to Virginia Giuffre’s civil lawsuit against him in New York by outlining his key legal arguments.

In an 11-page document submitted to the court, he individually addressed each of Ms Giuffre’s 73 points and outlined 12 “affirmative defences” he plans to use at trial.

He also requested a trial by jury, something Ms Giuffre had already done when she first lodged the lawsuit in August last year.

Who’s who in the Prince Andrew sex assault case?

In a bid to win the case, Andrew’s lawyers are using, among other things, the court’s jurisdiction, Ms Giuffre’s 2009 legal settlement with Jeffrey Epstein and her alleged “own wrongful conduct” while associated with him.

Here Sky News looks at what the key points in Prince Andrew‘s defence are.

Virginia Giuffre doesn’t live in the US

It states: “Giuffre’s complaint should be dismissed because this court lacks subject matter jurisdiction over the action, due to Giuffre’s improper assertion of diversity jurisdiction notwithstanding that she is a permanent resident of Australia and not a domiciliary of Colorado.”

Last year, Ms Giuffre filed her lawsuit with the US District Court for the Southern District of New York as the state’s Child Victims Act allows alleged victims of sexual assault to bring claims long after the usual statutory time limit.

She and her husband used to live in Colorado, but Andrew’s lawyers argue that she is now a “permanent resident of Australia”, which should prevent her from taking legal action in the US.

Sky News legal commentator Joshua Rozenberg notes that if this is accepted by the judge it “may be impossible” for Ms Giuffre to pursue her claim.

The Duke of York’s second defence falls under the term “waiver and release”.

It was released because Andrew’s lawyers believed it contained a clause that would exempt him from the current legal action.

In exchange for the money, Ms Giuffre agreed to “forever discharge… any other person or entity who could have been included as a potential defendant… from all, and all manner of, action and actions of Virginia Roberts, including state or federal…”

Andrew’s lawyers claim that “through her own actions” by entering into the agreement she has “waived the claims now asserted in the complaint”.

Judge Lewis Kaplan rejected the duke’s legal team’s bid to get the case thrown out on that basis, but they are continuing to pursue the defence.

In his sixth defence, Andrew accuses Ms Giuffre of “wrongful conduct” under the US legal defence of “unclean hands”.

Although not specific, he alleges that in her dealings with Epstein, Ms Giuffre has not always behaved in line with the law and thus should be “barred in whole or in part” from bringing any legal action against him.

In response, Ms Giuffre’s lawyer David Boies suggested this is “purporting to blame the victim of the abuse for somehow bringing it on herself”.

Maxwell ‘not a close friend’

In his response to Ms Giuffre’s lawsuit, Andrew denies that he was a “close friend of Ghislaine Maxwell”.

He admits that both Maxwell and Epstein attended his 40th birthday party in 2000, but denies that during the same year he threw Maxwell a birthday party at Sandringham, with Epstein “among the guests”.

In his 2019 BBC Newsnight interview, the duke said it was through Maxwell – a mutual friend – that he met Epstein.

He also told the BBC he and Maxwell had met up earlier that year.

“She was here [in the UK] doing some rally,” he said, but the pair did not discuss Epstein.

Not ‘sufficient evidence’ that photo of Andrew and Giuffre ‘exists’

In her lawsuit, Ms Giuffre alleges that the now-famous photograph showing her and Prince Andrew with Ghislaine Maxwell in the background was taken “at Maxwell’s home prior to Prince Andrew sexually abusing” her.

This is believed to have been on 10 March 2001 when the trio are alleged to have gone to Tramp nightclub in Mayfair before returning to Maxwell’s Belgravia home.

Andrew told Newsnight he took his daughter Princess Beatrice to a Pizza Express in Woking that night before returning home to Windsor.

His defence states that he “lacks sufficient information to admit or deny the allegations that there exists photographic evidence of his alleged meeting with Giuffre”.

He claimed he didn’t believe it was him as he did not usually dress that way to go out in London and would not engage in public displays of affection such as putting his arm around a woman’s waist.

Andrew denies being a ‘frequent guest in Epstein’s various homes’

In line with what he said to the BBC in 2019, Andrew’s legal document confirms that he met Jeffrey Epstein “in or around 1999”.

But he denies becoming a “frequent guest in Epstein’s various homes around the world”.

During the Newsnight interview, Andrew said he stayed at Epstein’s New York mansion in 2010 as it was a “convenient place to stay” during a trip in which he cut ties with the disgraced billionaire.

His legal team says there is not “sufficient evidence” that he began flying on Epstein’s private planes from 1999 – while Ms Giuffre’s lawyers claim this is evidenced in “available flight logs”.

They also argue a “lack of sufficient evidence” for Ms Giuffre’s claims that Epstein’s “Black Book”, which “documented his frequent travel with young girls and powerful individuals on his private plane”, included “12 different contact numbers listed for Prince Andrew”.

The document submitted this week is merely procedural as without a formal response, Ms Giuffre would win her case by default.

Now he has answered it officially, a trial date is pencilled in for between September and December this year.

This is likely to be by jury as both parties have requested it.

Joshua Rozenberg explains that this is fairly commonplace in US civil trials.

“He’s saying I’m not going to admit anything really,” he told Sky News. “You’ve got to prove all the allegations against me in front of a jury and I’m denying everything.”