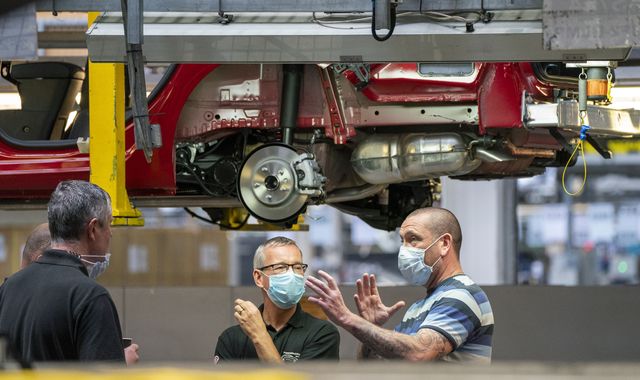 UK car production plunged to its lowest level since 1956 last year as a shortage of semiconductor chips piled further pressure on an industry battered by the pandemic, new figures show.

The impact of the shortages – which is being experienced by manufacturers worldwide – is expected to reduce later this year but continue to have some effect even into 2023.

If that is resolved the industry still faces a growing challenge from a surge in energy costs of up to 70%, according to the Society of Motor Manufacturers and Traders (SMMT)

Mike Hawes, the industry body’s chief executive, said it was “a dismal year”.

“The impact of the semiconductors really hit home in the last quarter of last year,” he said.

“However there is more optimism about 2022, that things will improve.”

The chip shortage will continue to make life “tough” in the first half of 2022 but should then ease, Mr Hawes added.

A lack of chips, thanks to pandemic-related shutdowns in the Far East, meant factories had to slow down or even stop production.

The chips form a critical part of modern car making, with each vehicle typically having 1,500 to 3,000 – but there was also disruption to the import of other components.

Staff shortages due to COVID-19 self-isolation and showroom closures during lockdowns took their toll too, as did the permanent shutdown of the Honda car plant in Swindon during the summer, which accounted for about a quarter of the annual decline.

The semiconductor shortage is thought to have knocked 100,000 off total volumes and early estimates suggest it could mean a smaller but still significant 50,000 hit for this year.

Car manufacturing numbers are however expected to see a recovery overall and hit over a million units in 2022.

But it is a far cry from the 1.5 million plus total seen in 2017, a high water mark for the industry in recent years – and a number that the SMMT admitted was unlikely to be reached again any time soon unless a major new factory opens or existing plants bump up production.

Its own forecasts suggest a 1.1 million vehicles being made in the UK by 2025.

Mr Hawes said it was “not all doom and gloom” with investment announcements – including at Nissan in Sunderland and Ford at Halewood – totalling £4.9bn last year, the highest since 2013 as the industry plays “catch back” after several years of uncertainty blamed on Brexit, according to Mr Hawes.

There was also an uptick for hybrid and electric production, now representing a quarter of the total.

Some manufacturers bucked the overall UK decline, with production of BMW-owned Mini in Oxford and the Toyota Corolla in Burnaston increasing compared with 2020.

But car makers, like other sectors, face additional challenges from surging energy costs – which could rise by 70%, with the industry not currently eligible for discounts given to so-called “energy intensive users” such as the steel sector.

If the semiconductor challenge can be resolved, energy prices will become “the most immediate, pressing one”, Mr Hawes said.

Meanwhile Brexit has added to paperwork and could complicate the transition to battery electric vehicles because of complex “rules of origin” criteria applied to trade deals.

The vast majority of UK vehicles are built for export with Europe the biggest customer.

Mr Hawes admitted that if surging costs continue it “will flow through to prices” adding to pressure on consumers already struggling with inflation at a near-30 year high.