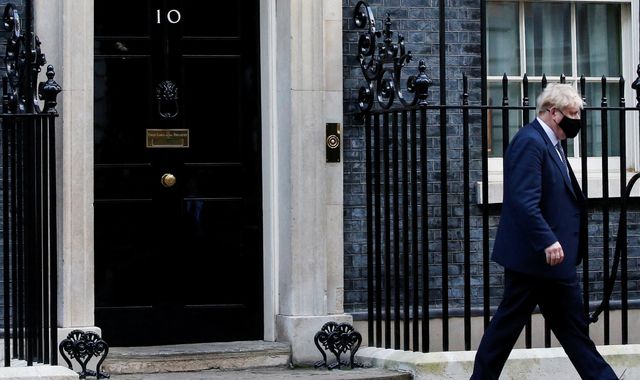 Boris Johnson has said he is “absolutely not” delaying the release of a much-anticipated report into lockdown parties at Downing Street and Whitehall – and promised it would be released in full.

The report, which is being compiled by senior civil servant Sue Gray, has yet to be received by Number 10

Asked during a visit to North Wales whether he is planning to delay the release of the report, the prime minister said: “Absolutely not. But you’ve got to let the independent inquiry go on.”

Row over how much of Sue Gray report is made public; ‘Save Boris WhatsApp group’ launched – politics live updates

Asked about whether he would publish the report in full, Mr Johnson said “of course”.

He added: “I can’t go beyond what I said yesterday, but I stick to what I said to the House of Commons.”

Uncertainty regarding how much of Gray report will be published

Yesterday, Mr Johnson failed to explicitly commit to publishing the full report once the findings of the inquiry are finally received by Downing Street.

Asked at PMQs by Labour leader Sir Keir Starmer if he will release the entirety of Ms Gray’s report, the prime minister replied: “We’ve got to leave the report to the independent investigator, as he knows, of course when I receive it, of course, I will do exactly what I said.”

Read more: What could Sue Gray’s inquiry into No 10 parties mean for PM and who decides what happens next?

Meanwhile, the PM’s spokesman said this week: “The findings will be made public in line with the terms of reference. It is our intention to publish those findings as received.”

Pressed on why full publication was not guaranteed, the spokesman said: “It is simply a reflection of the fact that we have not received the findings and don’t know its format, that’s why it remains our intention to publish it as received.”

Labour call for report to be released ‘in full’

It is believed the Labour Party could try and use parliamentary procedures to try and force the publication of the document in full if the government chooses not to do so.

Speaking to Sky News on Thursday, Foreign Secretary Liz Truss said she expected the Sue Gray report into claims of lockdown-busting parties to be published in full, but could not say when it would be made public.

Asked by broadcasters when she expected it to be delivered, said: “You’re asking me a question… I’m struggling to answer exactly when it will be published. I know that she will publish it as soon as she is able to.”

On Wednesday, Ms Truss told Sky News there could be “security issues” which mean parts of it are “problematic to publish”.

Along with questions regarding just how much of Ms Gray’s work will be made publicly available, there is also speculation around the timing of the report’s publication.

Report being checked by ‘lawyers, HR and the Met’

It is believed the delay in publishing the report is in part due to Ms Gray wanting to run the report past lawyers, HR and the Metropolitan Police to make sure the document can be published in full.

Suggestions that this could happen on Wednesday afternoon were dealt a blow after the Commons adjourned almost three hours early, before 5pm.

And the hopes of MPs being able to consider the report today were also dashed with MPs having concluded their business for the day.

He told reporters that he expects the Gray report to be printed “in full”, adding: “I expect MPs to be able to read that before the statement.

“I want them to be informed, to ask the right questions, and to have a debate and questioning of the prime minister, who quite rightly has said ‘I am coming to the House of Commons, I am coming there first’.

“Well, let’s make sure that whether it’s the opposition or MPs from the government, that they have sight of that statement before it’s made.”

The announcement by Met Police Commissioner Dame Cressida Dick that her force is investigating “a number of events” for potential breaches of COVID-19 regulations has placed more pressure on the PM over partygate.

Mr Johnson’s leadership has come under severe pressure amid the ongoing scandal and he could face a vote of no confidence if more than 54 Conservative MPs submit letters to the 1922 Committee of backbenchers.

Analysis: Which Number 10 staff could lose their jobs as a result of partygate