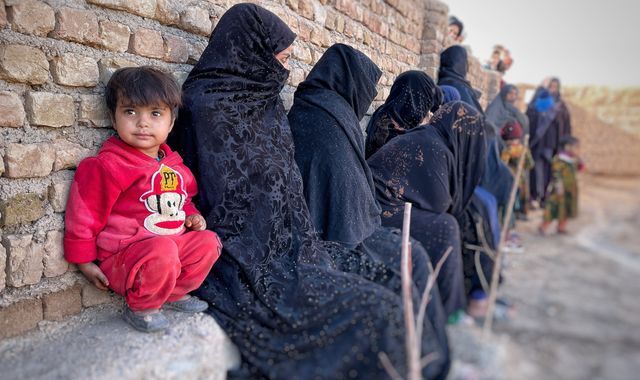 Innocent Afghans including millions of children who have nothing to do with the regime are facing starvation, former UN chiefs have warned, calling on the UK government to release millions in unspent emergency funding.

One million children will die if relief money isn’t sent to the country soon, one former UN general has said.

It comes after a Sky News report showed how Afghans are resorting to desperate measures to feed themselves after the Taliban takeover – including selling their kidneys.

Last August, the UK government promised to double aid sent to the country, but just £145 million out of £286 million has been dispersed so far – meaning nearly half the amount remains unspent and the financial year ends in April.

The country is so starved, and its population so desperate, parents have resorted to selling their children and kidneys just to survive.

A report from Sky’s correspondent Alex Crawford depicted the horror of life in Afghanistan, a part of the world which, the United Nations said, is becoming the globe’s worst humanitarian disaster.

Asked by reporters on Thursday what she made of the Sky News report showing that some individuals in Afghanistan are selling organs to buy food, Foreign Secretary Liz Truss said the revelations were “extremely, extremely concerning”.

‘Just the tip of the iceberg’

Sir Mark Lowcock, a former UN under-secretary-general for humanitarian affairs, told Sky News: “That graphic, compelling, heartbreaking set of stories is really the tip of the iceberg of what’s going on in Afghanistan right now.

“The vast majority of the population are starving and that is the reason people resort to these extreme measures.

“It’s not at all appropriate to enforce a sort of collective punishment on the total population of the country because you don’t like the regime that those people haven’t chosen.”

He called on the government to release the rest of the promised funds: “Where is the rest of that money, what are they waiting for?”

Afghanistan currently has billions of its own money stuck outside the country, frozen by foreign governments, which he said could be released to pay teachers and health workers directly.

The UN is seeking £4.4bn to help solve the humanitarian crisis.

“This is a significant requirement but the good news is quite a lot of it could be funded from Afghanistan’s own resources,” said Sir Mark.

He added that while people “are right to be concerned” by the Taliban, the price is being paid by children and innocent women.

‘One million children will die’

Baroness Valerie Amos, also a former UN under-secretary-general for humanitarian affairs, told Sky News: “The world food programme estimates if we don’t urgently get money into the country and help people that there will be three million children under five who will face acute malnutrition by March.

“Of those, a million children will die.”

She added: “We have to find a way of restoring the economy in Afghanistan without getting money into the hands of the Taliban and we have plenty of experience of doing this.”

Sir Mark added: “It’s not just a question of morality and humanity – that it’s not acceptable to impose a collective punishment on 40 million people for things they didn’t do – it’s also going to be counterproductive because it will antagonise people further, it will create grievances.”

‘We don’t want to work with the Taliban’

Ben Slater, a former British soldier who led an escape effort from Afghanistan after he was stranded in Kabul, said the selling of children has been happening since the fall of Kabul.

“Most families live day by day, hand to mouth. That has been going on for months.

Mr Slater runs Nomad Concepts Group and said the sending of funds into the country had to be managed carefully by the international community.