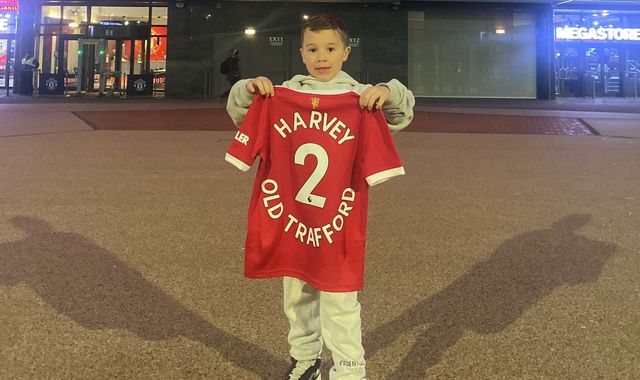 A Manchester United legend will be joining a young boy on a 15.5 mile walk to raise funds for a new school playground.

Sammy McIlroy will be alongside six-year-old Harvey Goodman for the trek starting at Stockton Heath Primary School in Warrington, Manchester, and ending at Old Trafford on Saturday.

Speaking to Sky News, the Northern Irish winger said he came across Harvey’s campaign after someone told his daughter about it in a local village shop.

“That’s how it all began,” he said. “When I heard his story of what Harvey was trying to do to get his school’s playground up to scratch and make it better, I thought it was a great idea and I thought he was very brave to walk 15.5 miles.

“He is looking after his friends and everyone at the school… for a six-year-old to come up with something like this to improve the school, it’s a great idea.

“He is a United fan as well which helps,” the 67-year-old added. “I bet he wishes he could have some of the present players but they’re on holiday at the moment so he is stuck with me.”

At the moment, Stockton Heath Primary School’s playground consists of a yard and a sports pitch that is in dire need of resurfacing.

The money Harvey is raising is set to go towards a huge renovation that will see the likes of a sandpit, a water area, a mud kitchen, and a small world play zone installed.

With an initial target of £3,000, Harvey has already smashed that with his JustGiving page sitting at £4,591 as of Wednesday night.

The young Manchester United fan told Sky News he was “super-duper happy” and could not wait to complete the challenge.

He explained how he came up with the idea after a school council meeting about improving the outdoor play area.

“I’m doing the walk and everyone is proud of me,” he said.

“I’m really excited and thank you to everyone who has donated.”

Asked what he was most looking forward to on the day, the cheeky youngster replied: “Going to the pub to have a pint”.

Harvey’s family, which also includes his four-year-old sister, his mum Naiomi, and his dad Matt, have been training ahead of the event, walking more than 62 miles.

“Harvey is really enjoying his training, he is so committed and really took it in his stride to adapt his weekends to doing long walks and hikes,” Mrs Goodman said.

“This walk is a huge challenge for anyone, never mind a six-year-old boy but the determination he has, is incredible to see. I know he will do a fantastic job on the day. We are so proud of him.”

‘It is absolutely vital’

Harvey’s headteacher, Dan Harding, said the renovation project is set to cost between £30,000 and £40,000 and should be completed in the next 18 months.

“What we have is great, we have got a good large area that is constantly used by the children… but we are constantly asking the children for ideas on how to improve play,” Mr Harding, who is also going on the walk, said.

“It is absolutely vital to their wellbeing and to their behaviour, social skills… all kinds of things can be developed through play.”

He added: “The amount of money Harvey has raised is phenomenal and to walk that kind of distance is incredible. I’m more worried about my fitness than his on the day, to be honest.”