COVID-19: Boosters increase protection against death from Omicron to 95% among over-50s – UKHSA 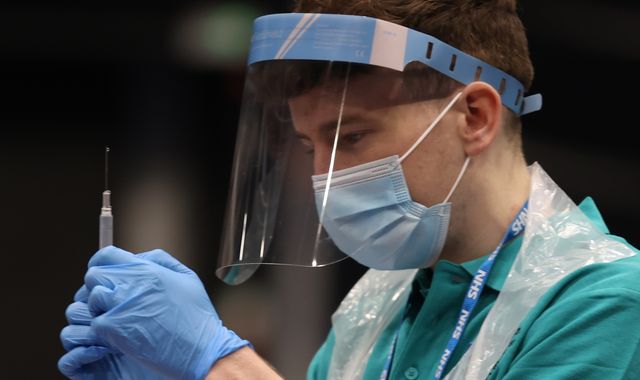 COVID-19 vaccine boosters increase protection against death from the Omicron variant to 95% in people aged 50 and over, according to the UK Health Security Agency.

About six months after the second dose of any COVID vaccine, protection against death with the dominant variant is around 60% in that age group.

But the UKHSA said that the figure rises to around 95% two weeks after a booster dose.

Protection against hospitalisation after a booster was around 90% for the Pfizer shot, dropping to 75% between 10 and 14 weeks after the dose.

For Moderna, effectiveness against hospitalisation was 90-95% up to nine weeks after the booster.

Dr Mary Ramsay, head of immunisation at UKHSA, said: “The evidence is clear – the vaccine helps to protect us all against the effects of COVID-19 and the booster is offering high levels of protection from hospitalisation and death in the most vulnerable members of our society.”

The agency also said that its initial analysis of vaccine effectiveness against the Omicron sublineage – BA.2 – found similar protection against symptomatic disease.

It found that 25 weeks after the first two doses of a vaccine, protection against symptomatic disease was 9% for BA.1 and 13% for BA.2.

But this increased to 63% and 70% respectively two weeks after a booster dose.

Almost 65% of those eligible have received a booster or third dose.

Earlier on Thursday, the UKHSA published its weekly COVID-19 surveillance report, showing that the highest rates of the virus are in those aged between five and nine, and the lowest rates are among those aged 70 to 79.

Geographically, the highest rates are in the North East of England, while the lowest are in London.

Also on Thursday, there were 96,871 new cases reported in the UK, with 338 deaths recorded within 28 days of a positive COVID-19 test.