COVID-19: Antisemitism ‘on the rise’ as anti-vaxxers blamed for helping to fuel hatred 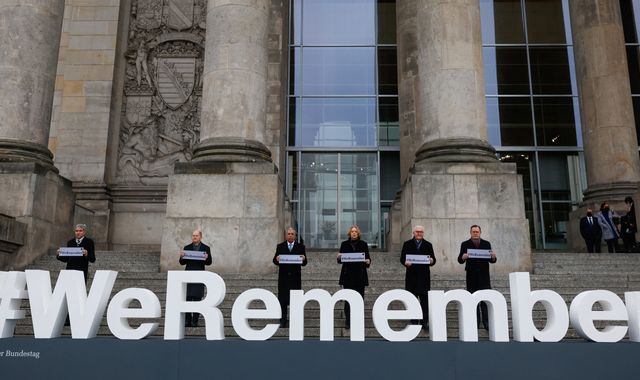 Holocaust survivors and politicians have warned antisemitism is on the rise as the world reflects on the atrocities committed by the Nazis on the 77th anniversary of the liberation of Auschwitz.

People across the globe are paying their respects to the millions of Jews persecuted at the hands of Hitler’s regime on Thursday, the annual Holocaust Memorial Day.

Followers of all faiths will this evening light a candle to remember all the victims of the genocide, as part of many events taking place, with some held online due to the pandemic.

It comes as politicians and survivors say antisemitism has gained traction during lockdowns.

Auschwitz survivor Inge Auerbacher, 87, recalled the “terrible time of horror and hatred” as she told the German parliament: “Unfortunately this cancer has reawakened and hatred of Jews is commonplace again in many countries in the world, including Germany.”

“This sickness must be healed as quickly as possible.”

Ms Auerbacher, who now lives in New York, shared a memory of almost being hit by a stone thrown by Nazi thugs in November 1938.

She was transported to the Theresienstadt camp-ghetto in August 1942.

“I was seven years old and the youngest of about 1,100 people, of whom my parents, I and a very few others survived,” she remembered.

Ms Auerbacher bravely revisited her past amid growing fears the COVID-19 pandemic has “accelerated” hatred and Holocaust denial.

Her warning came as the Israeli government accused protesters against COVID-19 restrictions who have likened themselves to Jews under the Nazi regime of helping to stoke antisemitism worldwide.

German parliament speaker Baerbel Ba, said the pandemic has acted “like an accelerant” to antisemitism.

“Antisemitism is here – it isn’t just on the extreme fringe, not just among the eternally incorrigible and a few antisemitic trolls on the net,” she said.

“It is a problem of our society – all of society.”

Around six million European Jews together with millions of others perished at the hands of the Nazis and their allies during the Holocaust – including 1.5m children.

Addressing a special parliamentary session in Berlin, Ms Bas said: “Our country bears a special responsibility – the genocide against the European Jews is a German crime.

“But at the same time it is a past that is everyone’s business – not just Germans, not just Jews.”

Unesco and the World Jewish Congress launched a partnership with TikTok on Thursday in a bid to help users access verified information related to the Shoah – the Hebrew term for the Holocaust.

According to the UN, 17% of content related to the atrocity on the social media platform either denied or distorted the Holocaust.