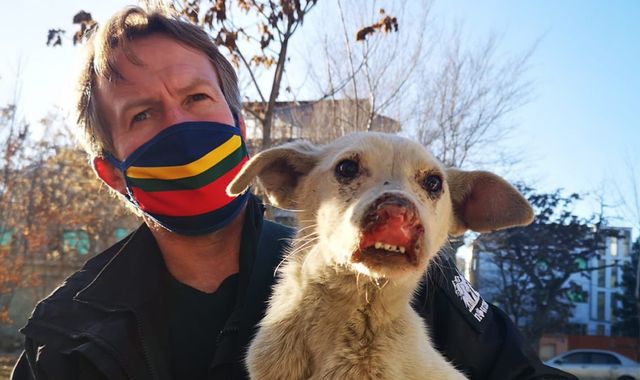 Boris Johnson’s parliamentary assistant contacted a private charter company in the hope of securing a plane to transport animals and staff during the evacuation of Afghanistan, telling them that her boss was keen, Sky News understands.

Trudy Harrison, the prime minister’s parliamentary private secretary (PPS), contacted the firm on 25 August – a few days before the operation to get Britons and eligible Afghans out of Kabul concluded – according to a charter employee who worked with her on the matter.

The employee said Ms Harrison, who is also the MP for Copeland, made clear to the company that she worked for the prime minister – repeatedly referring to “the boss”.

The charter flight firm felt it was obvious her requests came with the prime minister’s backing.

Ms Harrison was also keen to ensure members of the media were on the plane to watch the animals being evacuated to turn it into a good news story, the source at the company said.

When approached by Sky News, the MP confirmed that she did contact a number of companies to help with the evacuation effort “as a constituency MP” – however, none of her constituents were directly involved.

Ms Harrison admits she did tell staff she was PPS to the prime minister, but states Mr Johnson was not involved in any plans around evacuation.

“I was in touch with a whole raft of people and companies, there was a real focus on trying to be as helpful as possible in enabling organisations to understand government procedures and that’s the case here,” she told Sky News.

“I did this as a constituency MP at all times, but I am the prime minister’s PPS so I will have made that clear.

“I had no conversations with the prime minister at any time about encouraging him to authorise or support in any way Pen Farthing and the team.

“I did speak to Ben Wallace and Ben told me in no uncertain terms that it was not possible to prioritise in this situation.”

‘PM had no role in individual evacuations’

The charter employee who worked with Ms Harrison told Sky News the MP introduced herself and said a Virgin Atlantic flight which had been lined up to help evacuate animals and people for the Nowzad charity had fallen through and she wanted help to find another flight.

They added that Ms Harrison told the firm the money was being provided by a private sponsor but she said her “boss” was very keen to make sure something happened to get the animals out quickly.

Animals that were being cared for in Afghanistan by Nowzad, run by Paul “Pen” Farthing, were eventually airlifted on a plane unrelated to the firm Ms Harrison contacted – with some staff evacuated by road routes.

Number 10 said the prime minister had “no role” in the evacuation of Nowzad staff and animals.

“At no point did the PM instruct staff to take any particular course of action on Nowzad,” a spokesperson said.

This was maintained by Work and Pensions Secretary Therese Coffey, who told Kay Burley on Thursday: “The PM didn’t make any individual decisions about evacuations.”

The latest revelation comes after whistleblower emails raised further questions over Mr Johnson’s insistence that he did not intervene to assist animal charities during the evacuation of Afghanistan.

Last December, the prime minister dismissed claims made by a former Foreign Office official that the government prioritised animals over people as “complete nonsense”.

But new emails released by the Foreign Affairs Select Committee, which is conducting an inquiry into the government’s handling of the Afghanistan crisis, suggest Mr Johnson did personally authorise rescue efforts for pets and animals.

On 25 August 2021, an official working for Foreign Office minister Lord Goldsmith sent an email to the Foreign Office “special cases” team regarding the possible evacuation of an unnamed animal charity.

Ms Harrison’s first contact with the charter company occurred on the same day – when she also emailed Mr Farthing ensuring him that his staff and animals could be evacuated.

Dominic Dyer, an animal welfare campaigner who worked with Pen Farthing, told Sky News the prime minister also got involved directly in the campaign to help evacuate Nowzad staff and animals on 25 August and this unblocked issues.

Mr Dyer, who lobbied the prime minister to evacuate Pen Farthing and his animals, said Mr Johnson “played a key role in the evacuation operation” and that the newly-released emails “vindicate what I’ve been saying since August” – that “there were clear lines being given by senior officials that the prime minister was giving strong support to the project”.

In the Foreign Office letter, the official writes: “Equivalent charity Nowzad, run by an ex-Royal Marine, has received a lot of publicity and the PM has just authorised their staff and animals to be evacuated, [animal charity – name redacted] are hoping to be treated in the same capacity”.

“There was a direct trade-off between transporting Nowzad’s animals and evacuating British nationals and Afghan evacuees, including Afghans who had served with British soldiers,” he said.

This appears to support claims made last year in written evidence by whistleblower Raphael Marshall, a desk officer at the Foreign Office, that the department “received an instruction from the prime minister” to use “considerable capacity” to help animals leave the country that were being cared for by Nowzad.

Asked about this at the time, the PM said: “No, that’s complete nonsense.

“What I can tell you is that Operation Pitting, to airlift 15,000 people out of Kabul in the way that we did over the summer, was one of the outstanding military achievements of the last 50 years or more.”

Mr Farthing launched a campaign to get his staff and animals out of Afghanistan as the Taliban overran Kabul, using a plane funded through donations.

The UK government sponsored clearance for a charter flight, which sparked claims that animals had been prioritised over people.

On Wednesday, Lord Goldsmith tweeted: “I did not authorise & do not support anything that would have put animals’ lives ahead of peoples’.”

He added that he “never discussed the Nowzad charity or their efforts to evacuate animals with the PM”.

While Defence Secretary Ben Wallace said “at no point” was he told by Mr Johnson to “evacuate Pen Farthing, his workforce or his pets”.