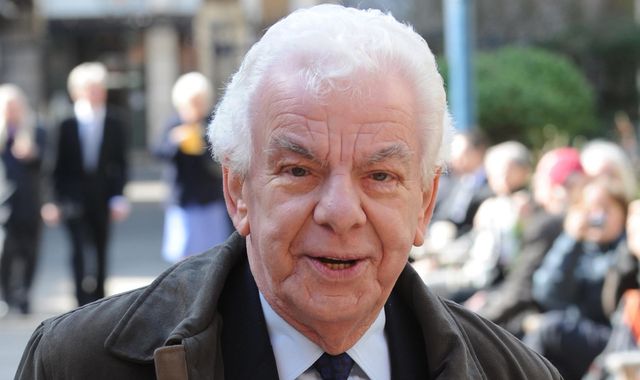 Barry Cryer, who has died aged 86, established himself as a writer on TV show The Two Ronnies, and he also worked with other stars of British comedy such as Tommy Cooper, Sir Billy Connolly, Kenny Everett, Dave Allen and Les Dawson.

Cryer received an OBE in 2001 and in 2018 was given a lifetime achievement award for his comedy career by the British Music Hall Society.

From quick one-liners to his jokes about birds, here is some of his best material from throughout the years.

Some of his best one-liners

"Quick – the noise made by a dyslexic duck."

"Analysing comedy is like dissecting a frog. Nobody laughs and the frog dies."

"Hashtag, party game where you chase each other for drugs."

"Picasso was burgled and did a drawing of the robbers. Police arrested a horse and two sardines."

In his much-told moth joke, Cryer told the story of an unfaithful wife who hides her lover in the bedroom when her husband returns early from a business trip.

When the man is discovered naked, clapping the air in a cupboard, he claims to have been sent by the council to deal with a moth problem, suggesting they have eaten his clothes.

Cryer claimed his ultimate parrot joke was published in 2020 in The Oldie magazine. The joke describes a woman who purchases a parrot for only £5.

"Well, I must confess, it was brought up in a brothel," says the shopkeeper. "And, to put it politely, it has quite an extensive vocabulary."

So she takes the parrot home, puts its cage in the living room and takes the cover off.

Then the woman’s two daughters walk in.

Then the woman’s husband walks in, and the parrot says, "Oh hello, Keith!"

You know about the guy who shot a golden eagle. He was in court in front of a magistrate.

The magistrate said: "This is a dreadful thing".

He said: "I never intended to. I was shooting pheasants and it flew into my line of fire."

The magistrate said, "Okay. Out of interest, what did you do with it?"

The magistrate said: "Good god, what did it taste like?"

One of Cryer’s first jokes told on-stage was about a man driving down a country lane who runs over a cockerel.

He goes to the farmhouse and knocks on the door.

A woman opens it and he says: "I appear to have killed your cockerel. I’d like to replace him.’

She replies: "Please yourself, the hens are round the back."’