Angel Lynn: Shocking video shows moment teenager is kidnapped by ‘controlling’ boyfriend before falling out of van on A6 near Loughborough 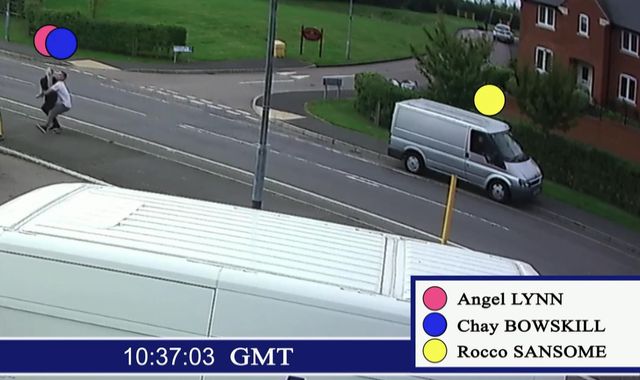 Shocking CCTV footage has been released showing the moment a teenage girl was kidnapped by her “controlling” boyfriend before she fell out of a van on a dual carriageway.

Angel Lynn was found lying with catastrophic injuries in the carriageway of the A6 near Loughborough on 17 September 2020.

The 19-year-old was taken to hospital where she has remained ever since, now requiring round-the-clock care.

On Wednesday, Chay Bowskill was found guilty of kidnap, coercive and controlling behaviour, and perverting the course of justice.

The 20-year-old, of Empingham Drive, Syston, was sentenced to a total of seven and a half years in prison.

As part of the trial at Leicester Crown Court, jurors were shown disturbing footage of the moment Bowskill chased down Miss Lynn and bundled her inside a silver van.

The vehicle, which was being driven by Sansome, then sped off and at some point in the journey, Miss Lynn fell out of the vehicle as it travelled along the A6.

She was later discovered by a passer-by who contacted Leicestershire Police.

‘I will never get to walk my daughter down the aisle’

Following the result of the court case, Miss Lynn’s family issued a heart-breaking statement saying their “lives have changed beyond recognition forever”.

Her father Paddy Lynn said: “Angel was so full of life and had such a great future ahead of her. That future has sadly been taken away from her.

He added: “We try to remain strong but we know that every day will be difficult and a struggle for us all, especially for Angel.

“Nikki and I will never be grandparents to Angel’s children. We don’t know what the future holds for our daughter but we try to put smiles on our faces each day but inside our hearts are bleeding out.”

Commenting after the sentencing of Bowskill and Sansome, Detective Chief Inspector Tony Harward said no verdict “can make up for the quality of life this young woman has lost”.

He added: “I can only hope that in time her family can find some comfort knowing justice has been done.”