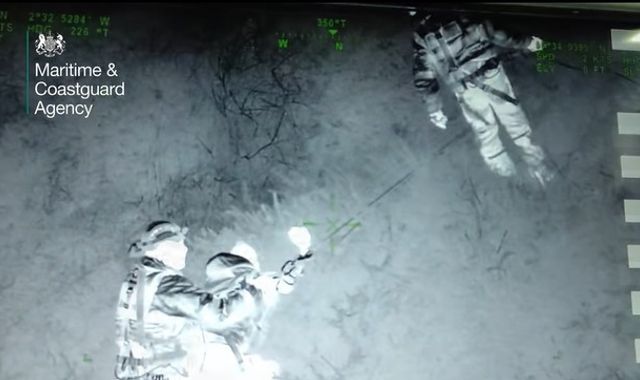 A walker who was rescued from the side of a steep and crumbling cliff was a “finger’s grip” away from plunging to almost certain death, according to the coastguard.

The man was clinging on in darkness about 10 metres (32ft) from the top at Seaton Cliffs, Arbroath, and in a precarious position as he was slipping with a “long way to fall”.

His companion called 999 and coastguard teams from Arbroath, Dundee and Stonehaven along with RNLI lifeboats and a helicopter were sent to the scene at Dickmont’s Den.

The crews found the walker cold and tired and in a “desperate situation”.

However, a helicopter rescue was deemed too dangerous due to the downdraft, which could have dislodged the man from his position.

So the teams carried out the successful but “tough” rescue from the cliff top using ropes in what was a “close call”.

The man had been out on a “nice winter walk” which “turned sour” as he found himself gripping on for his life on Sunday.

But he and his companion had been “well prepared with the right gear” and fully charged mobile phones.

Cliffs in the area are ‘particularly loose’

David Kerr, senior coastal operations officer at Angus and Dundee coastguard, said: “It was a close call – he was struggling to hold on, and it was a long way to fall. The teams knew they had to get to him and quickly.

“It was a tough rope rescue in darkness on a steep and crumbling cliff.

“It goes to show how quickly a nice winter walk can turn sour, one decision and suddenly the man found himself gripping on for life. It really can happen that easily and to anyone.

“They were well prepared with the right gear and fully charged mobile phones – they did the right thing in calling for help.”

He warned: “The cliffs in that area are particularly loose and it can be very easy to end up in a difficult situation. So we do ask people to stay well back, the cliffs around the UK are continually eroding and can become unsteady at any time.”