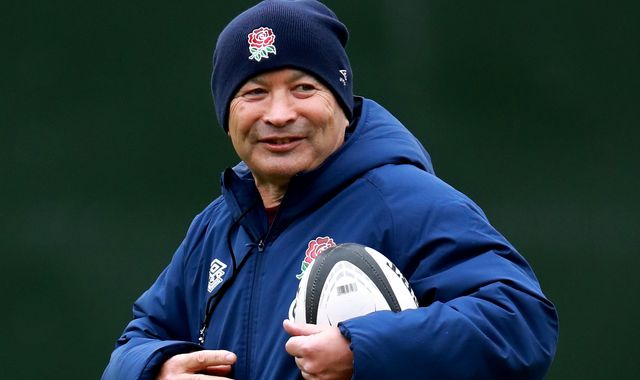 The head coach of the England rugby team, Eddie Jones, is adamant he’ll simply find replacements for any unvaccinated players that can’t travel to France or Italy in this year’s Six Nations tournament.

Without revealing how many of his squad remain unvaccinated, Jones told Sky News they have detailed contingency plans in place to deal with COVID-19 regulations.

Talking alongside England flanker Tom Curry at the tournament’s virtual launch event, Jones said: “I’m not a doctor, I don’t ask Tom, ‘show me your vaccination status’ – that’s not part of the selection criteria.

“When we work out what you need to have to get into France and if there are players ineligible or staff ineligible, then we’ll find replacements.”

England start against Scotland at Murrayfield but travel to both Paris and Rome later in the tournament – current restrictions in France and Italy prevent unvaccinated players from entering public venues like rugby stadiums with no exemptions for players.

“There’s no compulsion of the RFU or the England team management for the players to do anything that they don’t want to do.

“It’s their personal choice and we’re looking forward to going to France, that’s going to be a great game and everyone who is vaccinated will certainly be enjoying that experience.”

England prop forward Joe Marler has already tested positive and is a doubt for the opening fixture. Captain Owen Farrell has been ruled out of the whole tournament with an ankle injury.

Wales have recorded one positive COVID-19 case so far; forward Christ Tshiunza is now isolating after a PCR test confirmed a lateral flow positive result on the first day of their ​preparation camp.

Six Nations chief executive Ben Morel said they would look to rearrange any games disrupted by COVID-19 at the earliest opportunity: “What I’ve learned is that there is so much scenario planning you can do. You need to be ready for any kind of circumstances.

“What we will do is schedule any match at the soonest possible time. What that time is depends on many different circumstances. But hopefully everything will work as planned.”

Read more: No decision on whether Six Nations rugby matches can go ahead in Wales, Drakeford says

“There is so much excitement, though, for this Six Nations… especially after being sort of locked up in the last 18, 20 months, people just want to get out there and start living again.”

The first round of games start on 5 February.