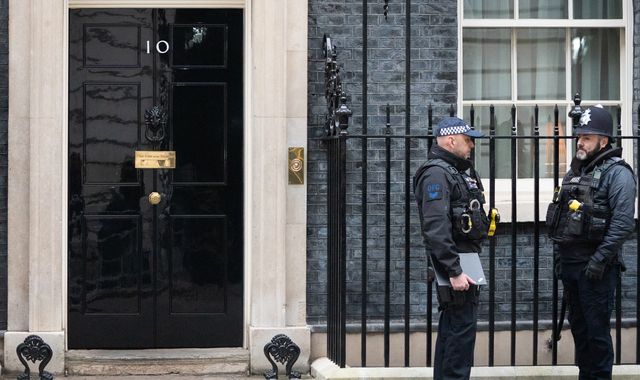 No 10 has yet to receive a report into lockdown parties in Downing Street and across Whitehall, the foreign secretary has confirmed to Sky News.

Speaking to Kay Burley, Liz Truss said the government would release the “findings” from the Cabinet Office inquiry, which is being led by senior civil servant Sue Gray.

There have been calls for Number 10 to release the document in full.

However, the foreign secretary said there could be “security issues” which mean parts of it are “problematic to publish”.

“But we will absolutely publish the findings of the report,” she pledged.

Expectations had been raised that Mr Johnson would address the Gray report’s findings in the Commons this lunchtime.

On Tuesday afternoon, it was understood that Number 10 would publish the report compiled around midday today and then the PM would make a statement in the Commons after PMQs.

But it is now believed the document will not be released for publication until later this afternoon at the earliest, with the chances of this being delayed until Thursday growing.

Uncertainty has been cast over its publication as Ms Gray’s team hold discussions with the Metropolitan Police.

Calls for full investigation to be made public

Labour has called for the report to be published “in full” – with leader Sir Keir Starmer saying anything less would amount to a “cover-up”.

The party’s shadow education secretary Bridget Phillipson said the revelations had turned the UK into an “international laughing stock” and accused ministers of devising “ridiculous excuses”.

“I think it’s now for senior Conservative politicians, for the Conservative Party, to think whether they really want to continue to put the country through this. It’s time the prime minister just did the decent thing and resigned,” she said.

Mr Johnson told the Commons yesterday he welcomed the probe and said it would “help draw a line under matters”.

The force has written to the Cabinet Office, formally requesting it refers all relevant information from its inquiry to help support the investigation. Sources have told Sky News this investigation will take “weeks, not days”.

Mr Johnson’s leadership has come under severe pressure amid the ongoing partygate scandal and he could face a vote of no confidence if more than 54 Conservative MPs submit letters of no confidence to the 1922 Committee of backbench MPs.

Share
Facebook
Twitter
Pinterest
WhatsApp
Previous articleDisney responds to Peter Dinklage after his comments about remake of Snow White and the Seven Dwarfs
Next articleTexas synagogue siege: Two men arrested in Manchester as part of investigation into attack